Just weeks ago, the embarrassing state of Kenyan sports was once again highlighted after the national women basketball team players released a video via social media while on international duty complaining over the poor conditions they were being subjected to.

In the one-minute video, the 10 ladies, led by captain Hilda Indasi and Spain-based Mercy Wanyama – who is the younger sibling to Harambee Stars captain Victor – enumerate a long list complaints, including the delayed payment of their allowances.

“We have experienced very poor standards. We have only been paid Sh10,000 so far for this assignment. We are being forced to play an international tournament with only 10 players (instead of 12) and one coach (instead of three) while being expected to perform at a high level which puts us at a great disadvantage,” Indasi says in the video.

“We are asking the leadership of the women’s commission to push the federation and the government to release funds as per the budget that was sent immediately after we qualified for the AfroBasket in Uganda. We understand the budget was $50 (about Ksh. 5,000) per player per day with some more money from the federation. As we prepare for our next game against Angola, we would like a solution for this issue.”

Now, hardly a month after the clip went viral, the ladies are crying for help yet again. Through a private conversation with this site’s Chief Editor, a close confidant of one of the Kenya National Women Basketball Team players revealed that the ladies are yet to receive their allowances; with an arrogant Sports P.S Kirimi Kaberia threatening to completely block their money if an official apology is not delivered to him.

“Hi Nyakundi, hawa wadem wanaambiwa wa apologize to PS Kaberia for doing this video ndio walipwe allowances zao. Wanalia deadly. Yaani PS mzima anatumia positions and his title kufinya wananchi. Mbwa, shoga yeye. One of these chics is our Head of Finance, really feeling sorry for her colleagues who 100% rely on the sport to pay bills and sort school fees. Here is my chat with her. You can publish the messages.” 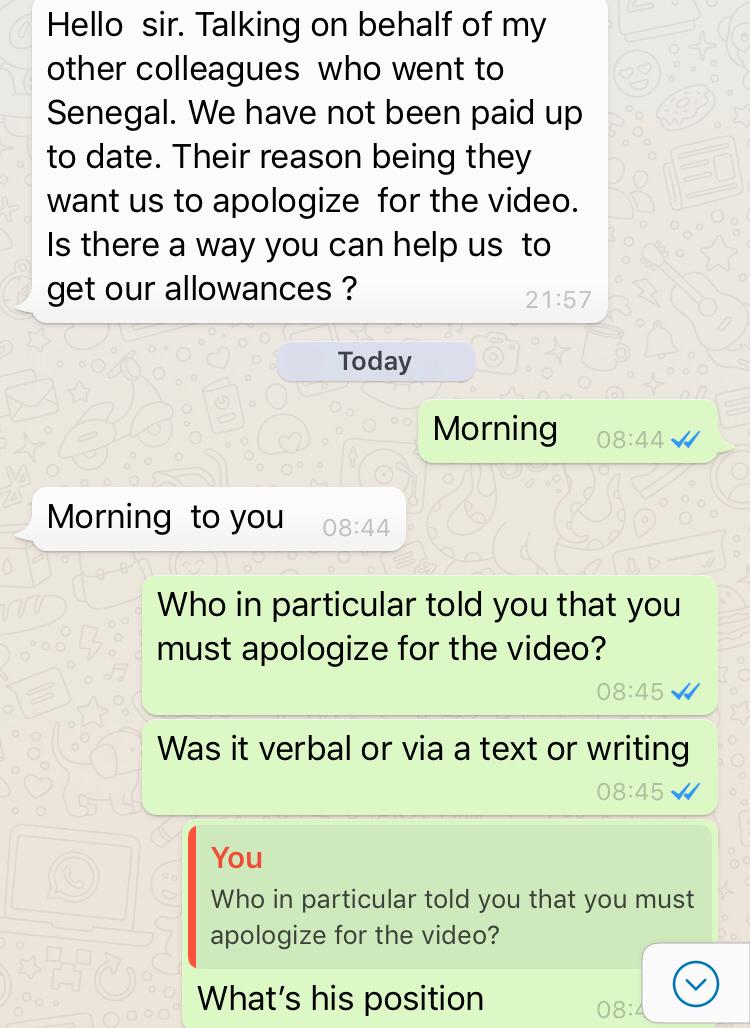 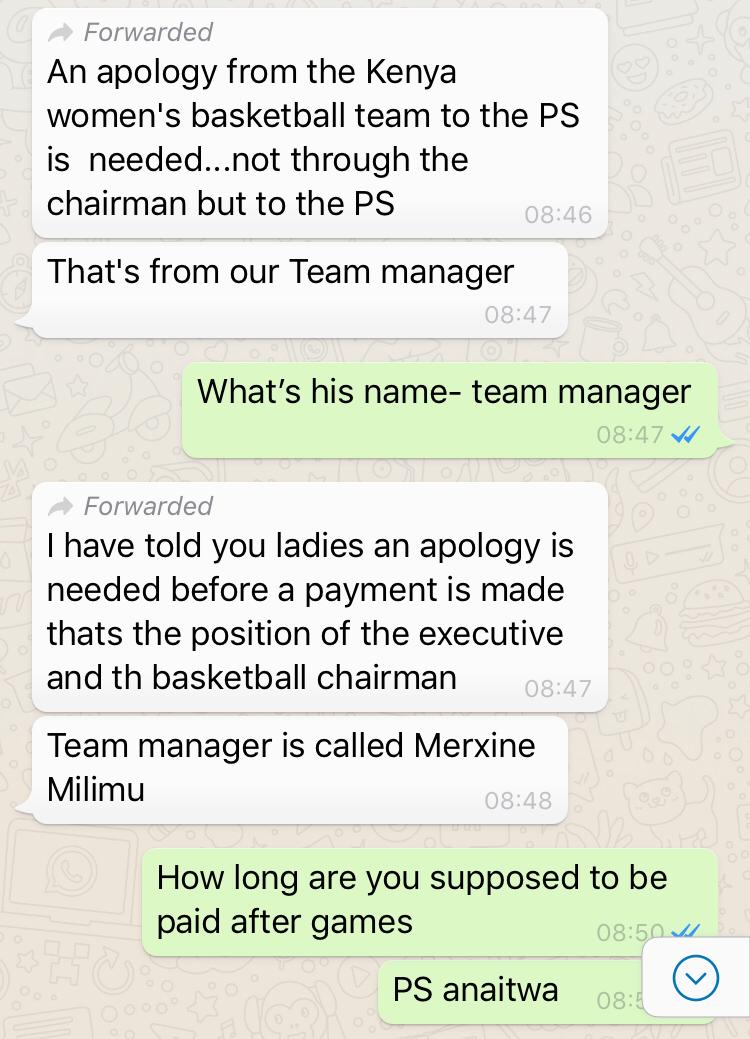 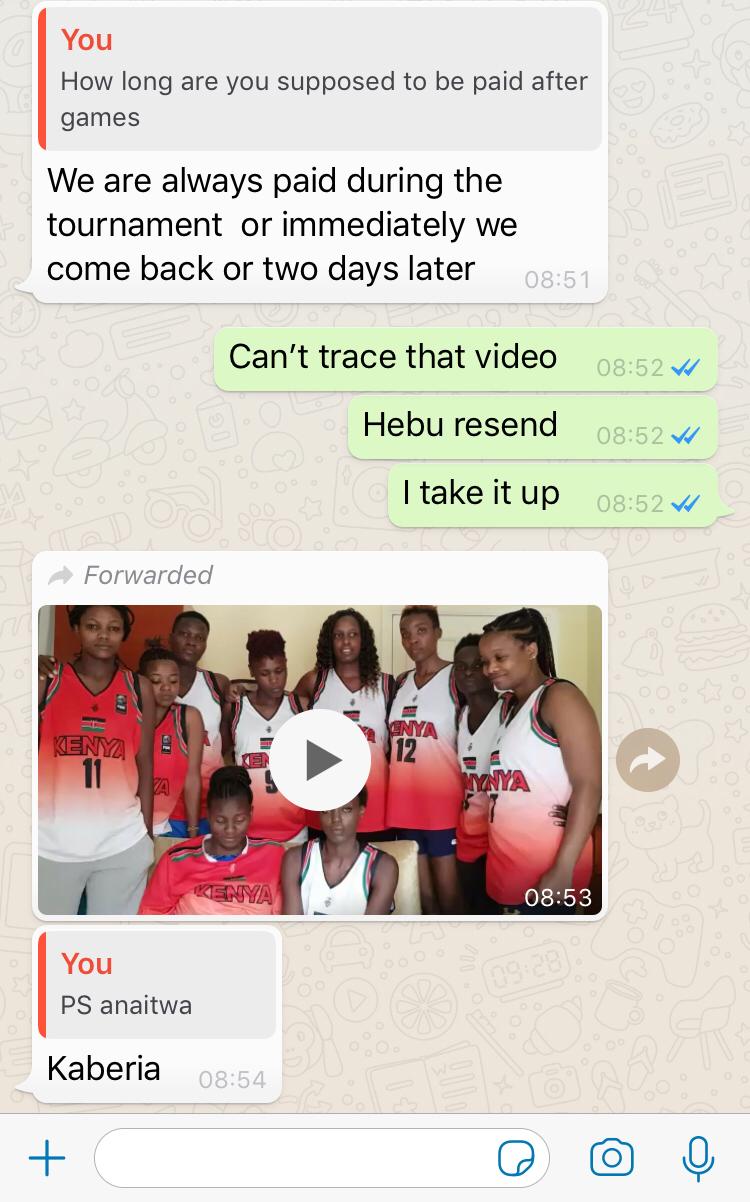 Mr. Kaberia is not a man new to the headlines. A quick search through the internet will remind you that in August last year, he had a hard time on when he appeared before the Public Accounts Committee (PAC) of the National Assembly over a Ksh. 1.7 billion scandal that rocked his docket regarding the 2017 IAAF Under-18 World Youth Championship.

Committee members questioned the expenditure during the championship, saying that it was wrought with procurement irregularities such as single sourcing, unsupported expenditure, unaccounted for medical supplies and lack of documentation to prove expenditure.

Led by the chair, Ugenya MP Opiyo Wandayi, members raised various questions on direct tendering, cost of items and services procured and conflict of interest in awarding of tenders.

For instance, Ksh. 27 million was paid to two law firms despite the fact that there wasn’t much legal work required at time the competition took place and the office of the Attorney General could have been used instead.

Another item that raised eyebrows was the procurement of Pewin Cabs at a cost of Ksh 23 million for transport, and Pewin Drycleaners who were paid Ksh 30 million for doing laundry where Kaberia foolishly struggled to convince the committee that the two companies had different owners despite having the same name.

In the same year, he was accused of grabbing about 100 hectares of land along Mt. Kenya Forest at the Ntulili forest in Buuri sub county, Meru county. Claims which he, obviously, vehemently denied.