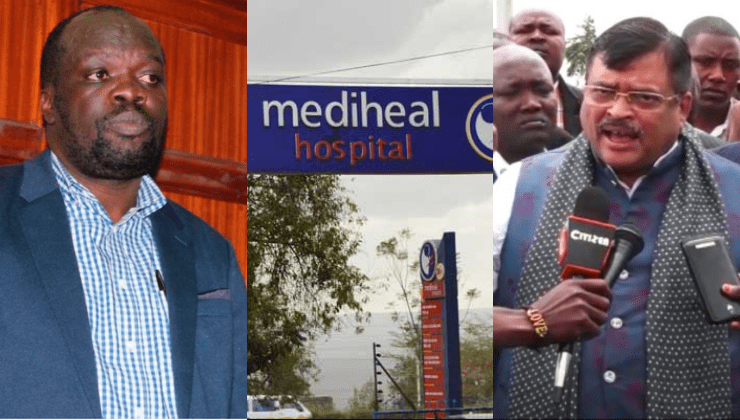 Veteran blogger Robert Alai has renewed his feud with Kesses Member of Parliament Swarup Ranjan Mishra after he accused the Mediheal Hospital and Fertility Centre owner of buying off a Kenyan judge in order to get a favourable court order against him.

Alai’s retaliation came just hours after he was officially gagged by the High Court Judge Msagha Mbogholi from publishing any more news stories exposing Mediheal Hospital following his posts earlier in the week which revealed how the facility is notorious for the illegal harvesting and trafficking of human organs as well as other violations, including the economic exploitation of vulnerable patients and extremely poor services. 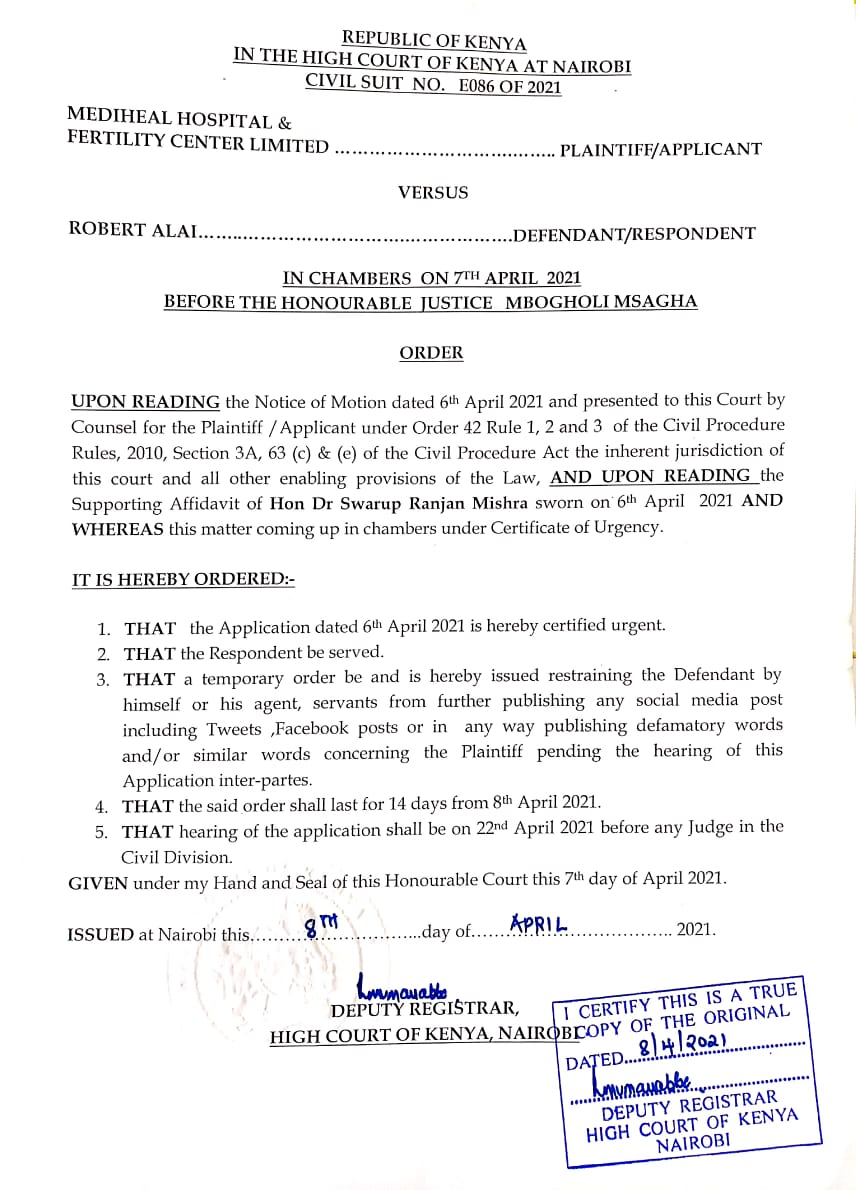 Additionally, the blogger claimed that some of those in charge of Mediheal Hospital are persons with questionable citizenship papers and who have on countless occasions been accused of lacking integrity and exploiting employees.

In one of the posts, Alai exposed how Mediheal Hospital was notorious for detaining patients. This was after a distraught Kenyan reached out to him for help after the hospital refused to discharge his wife with claims that her insurance provider had failed to pay.

“Hi sir, my name is Sospeter from Eldoret I have a problem, I took my wife to Eldoret Mediheal Hospital and they assured me that my wife will be catered for by insurance of which she is a teacher and fully contributed upon delivery they detain my wife that the insurance has refused to pay the because of late notification and on my part I notified the hospital on 4th the day my baby was born Nov and even the management confirmed through signed documentation,” the complainant wrote to Alai.

No hospital is detaining as many Kenyans as Mediheal. And nobody is taking this into account.

But moments after the court order was given, Alai took to social media and made explosive tweets claiming that restraining order barring him from writing about MP Mishra’s hospital was issued by a judge who was once arrested for corruption.

According to the EACC notice from 2009, the judge was arrested on 8th December 2009 at his residence in Mombasa on allegations of abuse of office after he fraudulently made payments for public property.

“It is alleged that on or about 7th July 2008, at the NSSF Building, Nairobi, within Nairobi Province, being persons whose functions concerned the management of public property, wit, the funds of the National Social Security Fund as the Corporation Secretary and Managing Trustee respectively, used their respective offices to improperly confer a benefit on M/s Kipkenda, Lilan & Co. Advocates by paying the said firm a sum of Kshs.8, 071,724.00 for services not adequately rendered in respect of sale of Kenyatta Avenue plots Nos.LR 209/11412, 209/11331, 209/12220, 209/12219 and 209/12287 belonging to the said National Social Security Fund,” read part of the EACC notice shared by Alai on Twitter.

“The same judge giving organ traffickers orders was once arrested by EACC for corruption,” he wrote on the post.

The same judge giving organ traffickers orders was once arrested by EACC for corruption. If it smells like a skunk, it is probably a skunk pic.twitter.com/BPl0VzUGbE

In a follow-up tweet, Alai expressed his displeasure at the Judiciary for allowing Mediheal Hospital to get orders from judges without even issuing the accused with any official court papers.

He maintained that judges were bribed.

“We don’t live in a country without laws. If you want justice, you go to court but serve all sides,” he wrote.

So Mediheal went and bribed some judges to get orders against bloggers without even serving the blogger court papers?

We don't live in a country without laws. If you want justice, you go to court but serve all sides. @Kenyajudiciary That's corruption.

Robert Alai’s posts on Facebook and Twitter are said to have caused great panic among the hospital’s hierarchy hence the rush to get orders preventing him from sharing any more information on some of the alleged happenings at Mediheal Hospital.

The management, including MP Kesses, are reportedly under immense pressure from current patients, investors, partners, financiers and donors who are afraid that if the claims are true, it could lead to complete loss of business and opportunities.

The team here at cnyakundi.com shall continue keenly monitoring this story and serve you with subsequent updates.