In a friendly played on Friday night, Victor Wanyama struck from the penalty spot as Harambee Stars registered a slim 1-0 win over Madagascar.

The Tottenham Hotspur midfielder rose for the occasion in the second half to coolly convert past the Madagascar keeper, in the supposed friendly which saw keeper Patrick Matasi save a penalty in the first half to keep Kenya in the game.

The East African nation started the match on a low note, resorting to defend and attack in numbers. It was a tactic that gave the opponents more time on the ball and could have been punished in the first half.

Harambee Stars conceded a penalty which Matasi did well to save and that helped the team to come back stronger after the break. The lone goal came from skipper Wanyama who sent the custodian the wrong way.

A Matasi howler almost gave the visitors a leveller late into the game, but Philemon Otieno was in a good position to clear the danger.

Now, just three days after the game, a controversial post on social media has left the Kenyan football community with more questions than answers.

According to Twitter user Nuhu Adams, on Sunday afternoon, Madagascar’s President Andry Nirina presented the national team with around $192,000 at the nation’s Akamasoa stadium ahead of the 2019 AFCON.

The Madagascar 🇲🇬 Government gave the national team around $192,000 today ahead of the 2019 AFCON.

Their total budget for the tournament is around $1.6 million.

In the photo with the team is President HE Andry Nirina Rajoelina at the Akamasoa stadium today.#TotalAFCON2019 pic.twitter.com/UD2vzkuXCz

This was surprisingly just a day after their game on Friday night, which would mean that the team took an immediate 10 hour flight back home after the game. Sounds odd, right?

Why would there be a need to rush the Madagascan players back home just moments after playing an exhausting 90-minute football match?

Considering professional football standards, the team would have been allowed at least a day of rest before catching the fatiguing flight home. I personally believe this is exactly what a nation like Madagascar which truly respects its players would do.

Having this in mind makes the matter even more complicated. Assuming the team left Paris on Sunday morning local time, how then did they manage to land and play a football match on an extremely sunny afternoon? Last time I checked, teleporting only worked in movies.

So who did Kenya really play in France? Is this another mischievous plot by Football Kenya Federation’s head Nick Mwendwa? His questionable past only makes you think a certain way.

It’s also good to note that very sketchy details were given on Madagascar’s team that night, even an official line-up wasn’t released online despite Kenya releasing theirs hours earlier. 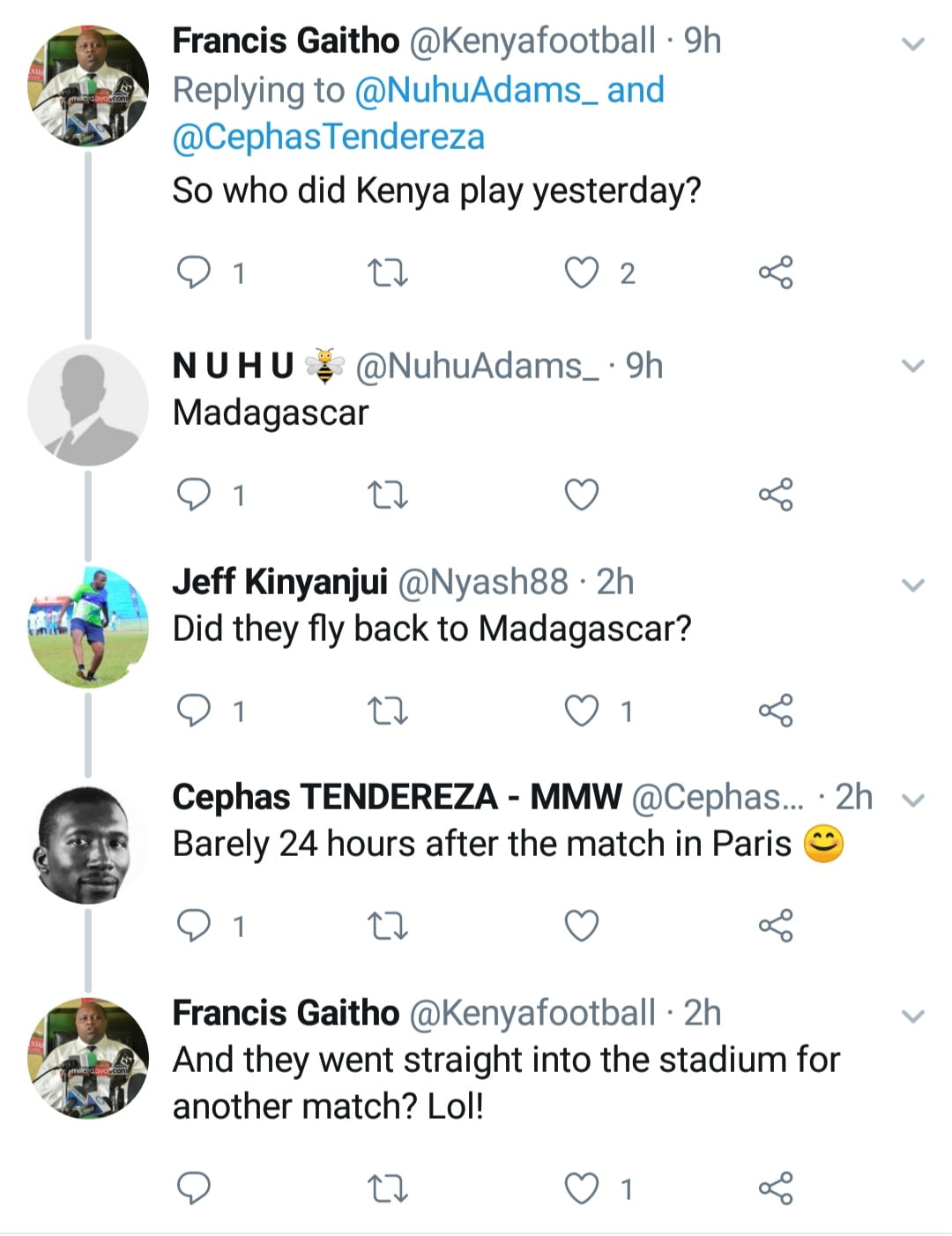 A few rumours spreading around suggest that Sebastian Migne’s boys played against a counterfeit Madagascar team and still only managed to score a penalty goal — with Victor Wanyama taking advantage and stat-padding his national record.

The skipper is still unsettled at Spurs with Mauricio Pochettino having expressed his distrust in him when he left him to freeze on the bench during the Champions League final a few days ago.

Unless this whole issue is one big misunderstanding, both nation’s federations have a lot of questions to answer.