In May 2016, the former PM of Kenya Raila Odinga exposed the government’s cover-up plans after it emerged that a State Secret Paramilitary trained police unit dubbed Kwekwe Squad had been deployed to execute State critics.

Raila, then CORD flagbearer was speaking at the funeral of then deep state operative turned whistleblower the late Jacob Juma who, according to RAO was eliminated by Kwekwe Squad.

“Up to today, they are saying they are investigating . . . Kwekwe Squad assassinated Juma and that is why they are not interested in carrying on with any investigation,” said Raila who dismissed the then the ongoing probe by police and called for an inquest to be conducted by credible private investigators.

The State, through the then National Police Service spokesman George Kinoti reacted swiftly and denied the existence of the dreaded Kwekwe Squad.

Whether they call them "Kwekwe Squad" or "Flying Squad" or "Special Crimes Units," Kenyans know that these are ILLEGAL ASSASSINATION SQUADS whose primary purpose is the elimination of PERCEIVED THREATS to the illegitimate President. Patriots: MOBILIZE!https://t.co/PGMWGty8GG

Yesterday, President Uhuru was in Kajiado County where he presided over the graduation ceremony of paramilitary officers who attended a three-month Kenya Police Tactical Operation Course at the National Police Service, Magadi Field Training Campus where he instructed the police to be firm when dealing with threats to national security.

“As a Government, we will ensure you are well equipped and able to stand firm without asking help from the GSU or military but are able to undertake your duties effectively protecting your nation as general duty officers posted in various stations. I have no doubt you will be able to perform those duties. Our call as a Government is that you work in collaboration with others because it is by performing those duties that you will be able to defeat the enemy undermining the security of our nation.” 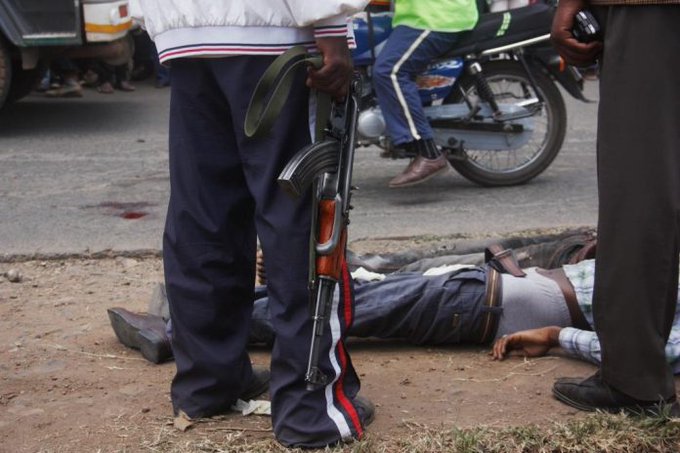 A, then Flying Squad officer at a crime scene (Pic/courtesy)

President Uhuru, while addressing the graduating officers who will be incorporated in the Quick Response Unit and deployed as General Duty Officers in crime-infested areas of the country reminded the policemen to remain true to their calling and spearhead the fight against organised crime including terrorism.

“Continue to maintain discipline and bravery as you ensure you utilize the skills you have learnt to protect our citizens and the interests of the country. Don’t be involved in criminal activities. Don’t violate the rights of your fellow citizens whom you are supposed to protect. Protect our country and deal firmly with the enemy but live at peace with fellow citizens because if they have confidence that you are there to protect them that in itself will give them the confidence to also share the intelligence you require to root out the enemy,” he told the officers.

The President reinforced the government’s commitment to the modernization of the National Police Service (NPS) while stating that internal peace and security are the foundation for the nation’s prosperity.

“The fundamental reason for the establishment and existence of the State is the provision of security. I cannot over-emphasize that none of the fundamental rights that underpin our vibrant democracy could be enjoyed by Kenyans without security. While our fiscal situation has been tight, we, as a Government, have prioritized the modernization of the Security Sector in terms of equipment and infrastructure. Equally important, we have taken steps to improve the terms of service, through the provision of benefits such as comprehensive medical insurance cover and group life insurance,” he stated.

CS Matiang’i thanked the President for his steadfastness in ensuring the security of all Kenyans noting that the increased Government investment in the security sector was bearing fruits.

“You have taken your foremost constitutional responsibility as President of our country and as our Head of State in securing our country very seriously,” Dr Matiang’i said.

The story of Kwekwe Squad, the highly feared and most notorious crack unit often linked to some of the unexplained assassinations sanctioned by the State in Kenya, was brought again on the spotlight in May this year after Kenyan Canada-exiled Lawyer Miguna Miguna said they eliminated sergeant Kenei–a security guard who was attached to DP Ruto’s Harambee Annex.

In June this year, Wikileaks leaked a letter by the then police who was also the part of the Kwekwe squad who claimed that they were paid Ksh 25000 weekly in the mission to flush out the Mungiki. He, the officer himself killed 37 people in that mission and he estimates that they killed 1869 Mungiki or suspected Mungiki as well as 631 robbers.

Here are the exposed letters

The letter courtesy of Wikileaks

Hacker steals entire Countries’ data; puts it up for sale

I Was Not Sacked: Kamene Goro Addresses Exit From Kiss FM

Mediheal Staff to down tools over salary delays

Mwananchi Credit haunts man to the grave to repay loan

Post Views: 9,565 Move over, roses and chocolates, there’s a new romantic gesture in town and it’s all thanks to Kevin Mboya, a digital...

Post Views: 5,491 TikTok sensation, Azziad Nasenya, has addressed the recent scandal surrounding a viral explicit video that has been circulating on social media....

Post Views: 4,266 News that two individuals were arrested for causing a commotion while claiming ownership of a Karen estate land set my alarm...