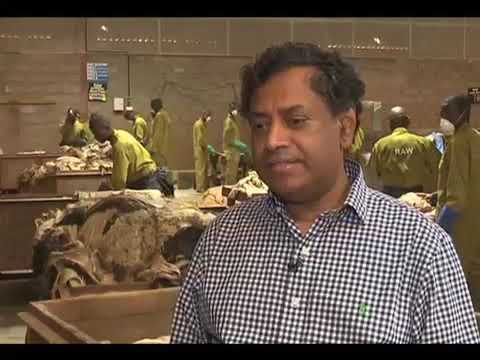 Three days after this blog authoritatively informed our loyal readers of how the ruthlessly greedy Indians have extended their despicable state capture to the hide and skins industry in Kenya, trusted insiders have come forward to unearth more dirt on the profit-seeking racket that threatens to disempower ordinary locals.

As it turns out, the Asian moneybags are not only illegitimately exerting their dominance in the highly lucrative leather business, but also treating poor young Kenyans who tirelessly slave in their massive factories like trash.

In this regard, reliable sources have fingered Alpharama Limited – the same giant firm already linked to the recent introduction of a new punitive law that prohibits traditional ground drying of skins and hides – for harbouring foreign administrators who reportedly do not pay taxes.

Speaking to us on Tuesday, 31 May, a former staffer boldly publicized the disheartening state of affairs at the leading leather producer and exporter, where employees are subjected to constant racial discrimination and blatant exploitation.

Supervisors are strictly Asian, and the payment disparity compared to their native counterparts is off the roof.

On paper, they stipulate the salary as just Sh40k, but it is an open secret that the guys take home over Sh300k, which is discreetly wired to offshore bank accounts.

Do not forget that Alpharama only hires Indian supervisors who are paid ‘only 40k’ yet they earn over 300k to 1 million.

They pay the rest of the cash in their own country through the Indian banks to avoid taxes.

That guy is a beast.

I once worked there,” the source writes.

Alpharama Limited has become so synonymous with disreputable headlines that Kenyans are no longer fazed by never-ending complaints against the company.

In October 2020, it was embroiled in yet another tax scuffle after the Kenya Revenue Authority (KRA) fingered them for failing to submit returns in excess of Sh150 million.

The scheme involved the fictitious declaration of taxes, understatement of weights and values, as well as cross-stuffing cargo in the suspicious trade in raw hides and skins.

In one of the trade patterns that attracted the attention of the detectives, an alleged transit of raw hides from South Sudan passed through the port of Mombasa destined for Colombo in Sri Lanka.

They offloaded the same consignment from the Sri-Lankan Port and, eight days later, returned to the port for shipment to Nigeria.

“We had first suspected that the cargo may have originated in Kenya but was concealed as a transit outward consignment.

The shipment to Colombo and then a transshipment to Nigeria just a week later through the Mombasa port added to our suspicion and triggered an investigation that has flagged various anomalies in the suspicious trade,” an investigator said.

The detectives had for a while suspected the use of raw hides and skins to conceal drugs owing to the powerful stench that comes from the consignments, which largely make it hard for a thorough inspection by port officials.

Port officials also questioned the link to Sri-Lanka, a major narcotic hot spot, according to the United Nations Office on Drugs and Crime (UNODC) and the final destination to Nigeria raised further questions.

The syndicate was also said to have been exporting empty containers as transit cargo to the Indian Ocean island nation, located off the southern tip of India and known to be a major transit hub for international drug traffickers.