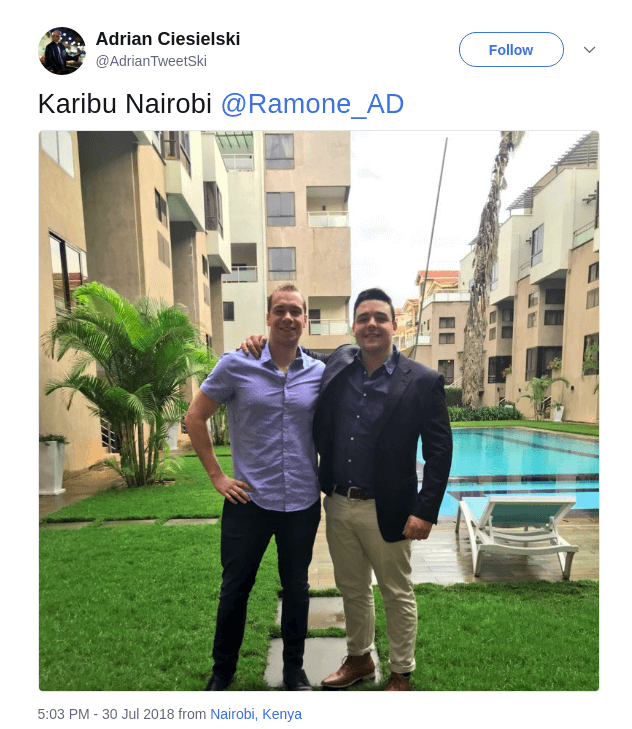 Twitter executives were in Kenya on the same Day Blogger Nyakundi was suspended. A week before their arrival, Twitter had suspended many influencer’s accounts in a coordinated effort to crack down on influencers to boost Twitter Ad Buying. Twitter is working with Scangroup to run their operation.

An exposed Twitter executive, Ramone Martin, has been accused of blocking Kenyans criticizing him on the micro-blogging platform, Twitter. Many Kenyans have complained of being blocked by the Twitter executives instead of listening to criticism, and act on the concerns raised.

The Twitter executives met government officials and attended a Safaricom Blaze event, though it is not clear if they did that as individuals or they were representing masters of the universe, Twitter. The event was organized by Scangroup, a company whose employees have been lobbying for the banning of Nyakundi from Twitter.

A few weeks ago, Social media users complained about any hashtag criticizing Safaricom not trending and it now seems we have the answers.

Well, after these two executives were exposed, Kenyans started asking them the hard questions leading to many being blocked by the executives. Twitter doesn’t really take the opinion of Kenyans serious, and that is why they shut the @TwitterKenya Account after they were accused of manipulating trends in favour of the government and censoring opposition conversations.

Caption: Twitter executive Ramone Martin blocked a social media user who asked him about his relationship with government officials and scandalous companies like Safaricom and Scangroup

It is not clear why Ramone Martin, Twitter Account Executive – East Africa is blocking users but all we know is that message is home. Maybe he only wants to listen to Scangroup, Safaricom and government officials that will help Twitter sell ads in Kenya.