President Uhuru Kenyatta is faced with a challenge to come up with a formula to share  allocations to 47 without disputes.

His handshake partner and ODM boss Raila Odinga could help break the ice but still, the President is facing an uphill task in pushing through the formula that has been rejected by at least 25 Senators.

Eighteen of them senators would have their counties lose up-to Sh17 billion if the formula is adopted.

Many senator’s from Raila’s Nyanza backyard and parts of Deputy President William Ruto’s Rift Valley turf rejected the formula. Even regions that that stood a chance to gain from the formula also opposed it in solidarity with the losers.

The formula should be supported by at least 24 out of the 47 delegations (one vote per county) to pass.

“Yes, my county is gaining some millions but I will defend every county including Migori and others, because sharing is biblical and while today Migori is gaining, tomorrow I will need the support of my neighbour if I am losing,” said Ayacko.

Counties from the marginalised and less populous regions of Northeastern, lower Eastern, Coast and parts of Nyanza and Rift Valley opposed the proposal.

The President supports this contentious method proposed by the Senate Finance and Budget Committee and has instructed his supporters in the House to lobby for its passage. This heavy is destined to fail given the growing list of the opponents.

Counties in President Kenyatta’s Mt Kenya backyard will gain Sh300 million and above, except Tharaka Nithi which will lose Sh367 million if the proposed method passed.

This is attributed to last year’s population data that classified the region as the most populous and this proposed formula gives more weight on the population as opposed to the current formula method that bases it’s priorities land mass.

“We are consulting the former PM as well as other national leaders. The stalemate impacts all counties and everyone, hence our endeavour,” Majority Chief Whip Irungu Kang’ata said.

Makueni Senator Mutula Kilonzo Jr said they opted to build consensus from ‘above’ before presenting a fair-for-all formula on the floor. He said they have advanced their negotiations and a compromised proposal that will be fair for all on the table.

But the two senators said it was not clear when a revised formula will be tabled on the floor, A delay in tabling the proposal may plunge counties into serious cash crisis. 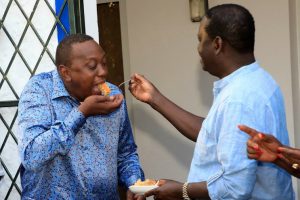 President Kenyatta and Odinga in a pat event. [p/courtesy]

The biggest losers are Wajir, Mandera and Marsabit counties whose allocations will be slashed by Sh1.9 billion, Sh1.8 billion and Sh1.8 billion respectively if the formula is passed.

Odinga and odm lawmakers have been used to fill up spaces left after DP Ruto and his allies were kicked out. He may sit and watch or come to the rescue but the entry of Wiper Party and KANU must have sent mixed signals to Odinga.