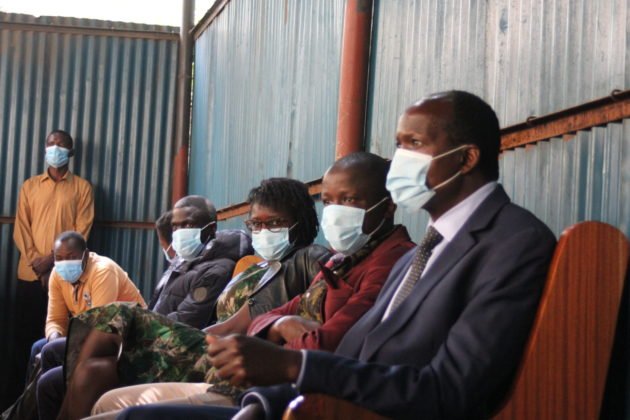 Migori Governor Obado, his four children and 11 other county staff and suppliers were charged with corruption on August 27, 2020

Migori Governor Zachary Okoth Obado and his two sons and daughters spent were forced to spend their weekend in police cells awaiting bail ruling on Monday.

The group was arrested on Wednesday following three hours of grilling by Ethics and Anti-Corruption (EACC) officers in Kisii moments after they surrendered themselves at the agency’s offices along the Kisii-Kilgoris road, escaping imminent arrest for stealing more than Sh300 million public money.

While this was not an entirely new experience for Obado – having been charged with murder back in September 2018 becoming the first governor to face capital offence – his children Dan Achola, Scarlet Susan, Jerry Zachary and Evelyne Odhiambo found the dingy dungeons that serve as Kenyan police cells quite an unfamiliar territory as the days slugged on.

It is understood that Obado, his two sons and other male suspects were taken to Ethics and Anti-Corruption Commission Police Station at Integrity Centre whilst his daughters and the female co-accused are detained at Kileleshwa Police Station.

Lucky for the boys, at the EACC police cells, guests have the luxury of a bed and a mattress which is the exact opposite at Kileleshwa cells where his daughters have for the last few days faced a baptism of fire, having to put up with life on the cold floor.

Fortunately for them, however, it has been a somewhat uneventful weekend at the station which meant that the cells remained uncrowded for the better part of their stay, with officers at the station recording as low as eight remandees in the cells.

Scarlet, according to officers at the station, spent much of her time at a corner in the cells and slept for the better part of the days while her sister Evelyn (the one captured on camera showing Kenyans the middle finger) walked around and had light conversations with cellmates.

They added that at first, they thought Scarlet was sick but after interrogation, it became apparent it was just her way of coming to terms with the predicament she finds herself in.

The governor’s wife, Hellen Obado, and two other close family members, who include an aunt of the suspects, have been allowed to see the children at least three times a day and were even given a pass to deliver home-made food and some extra clothes forthe girls who have had to get used to the not-so-fancy cell washrooms.

It has been a tough balancing act for Mrs Obado who has had to juggle between Kileleshwa Police Station with the daughters and the EACC Police Station to deliver tea and snacks to her husband and sons.

The sisters have also not been exempted from cell duties which includes cleaning the dirty floors.

Obado has been denied access to his mobile phone, only communicating with the outside world through his loyal handlers who visit from time to time.

If convicted his final term in office will end prematurely, and as matters stand, his deputy, Nelson Mahanga, is likely to take over if and when he is barred from accessing his office.