On Tuesday, in the changes made by unknown people, exiled Kenyan lawyer Miguna Miguna’s Wikipedia profile was edited to read that he is a Canadian citizen and advocate of the High Court of Canada.

“They have been logged on @Wikipedia for the past 3 years and have been desperately trying to erase my Kenyanness daily. They are hopelessly childish!” Miguna Miguna posted o his Twitter Account.

Wikipedia, a free encyclopedia search of the barrister and solicitor general who is also the co-founder of KMM Lawyers, a multinational law firm indicated that he is not a Kenyan. The General has been having it rough with the State after he was illegally ejected from Kenya and a red alert place on his travel in, around Kenya and her neighbouring countries.
Previously, Miguna Miguna’s profile indicated that he holds dual Kenyan and Canadian citizenship. The angered Miguna Miguna took to social media accusing Raila Odinga and President Uhuru Kenyatta operatives in the government of attempting to erase his Kenyan roots and citizenship.

“When an illegitimate regime hires an army of hungry ruffians to edit my Wikipedia page and ILLEGALLY tries to ERASE my KENYAN ROOTS and CITIZENSHIP by calling me a ‘Canadian’ or ‘foreigner’ when Kenyans call me a 5-Star GENERAL, it’s a sign of weakness and desperation, ” he wrote on Twitter.

Wikipedia’s collaborative feature that allows anyone to contribute to its content, makes it possible for malicious people to alter information on public figures.

Miguna, whose attempts to return home have severally been thwarted by the government in the recent past, has often accused President Uhuru Kenyatta and ODM leader Raila Odinga of being behind his citizenship woes.

Whatever despot Uhuru Kenyatta's and Conman @RailaOdinga's armies of confusion and demagoguery call me will never change who I am, erase my deep rootedness in Kenya or make me what I am not. Viva! #UhuruTheDictator #DespotsMustFall

In January this year, the exiled Lawyer was ejected from Air France and Lufthansa flights following a red alert issued by the government blocking him from entering Kenya. 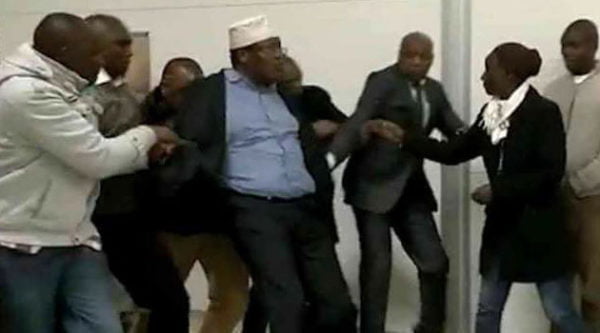 The Canada-based barrister, famous for almost everything amongst of them, I AM NOT BOARDING phrase was forcefully deported on February 7, 2018, after being detained for days following his arrest for presiding over Raila Odinga’s oath as the people’s president on January 30, 2018.

He was deported, for the second time, on March 29 after spending more than 72 hours in a tiny room at the Jomo Kenyatta International Airport (JKIA) after authorities denied him entry into the country.

According to the government, Miguna acquired Kenyan passport in 2009 at a time when it was illegal for a Kenyan to hold dual-citizenship. The government maintains that since the 2010 constitution allows dual citizenship he must reapply so that he can be issued with a Kenyan passport since his original passport had been destroyed.

However, the Kenyan born insists that at no point did he denounce his Kenyan citizenship.

“I have never, ever renounced my Kenyan citizenship and will never do that. I’ve never even contemplated it,” an infuriated Miguna said in a past interview.

In a ruling delivered on December 14, 2018, Judge Enock Chacha Mwita noted that Miguna’s deportation was unlawful and in violation of the Constitution.

Justice Chacha dismissed the government’s narrative that Miguna is not a Kenyan citizen.

“I find and hold that he did not lose his citizenship upon acquiring a Canadian passport,“ Justice Mwita mentioned concerning his passport.

When a brutalized slave cowers, trembles, kneels, lowers his head, prostrates himself/herself and addresses the slave owner/driver as "Master" or "Massa," s/he does so out of FEAR; not out of love, reverence or RESPECT. Stand up and reclaim your dignity!