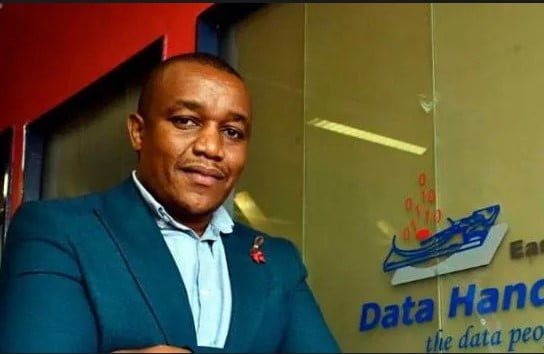 A day ago, this blog reported how East African Data Handlers, Group Managing Director George Kariuki Njoroge, is embroiled in a debt case at the Chief Magistrate’s Court in Nairobi for falsely obtaining Sh2m from Aworky General Supplies Limited with a promise to pay back the soft loan only to back down on his commitment.

The complainant has further accused the East African Data Handlers of ordering office furniture and other goods worth the sum of Sh205k but later not paying for the delivered goods.

In case you missed out on that juicy story, you can read more by clicking on this link.

As it turns out, this is not the first time the self-proclaimed IT guru is hitting the headlines for the wrong reasons.

Similarly, Safaricom once sued him for defrauding them millions of shillings through his dubious data firm.

The giant telecommunications company took Mr Kariuki to the corridors of justice following the controversial loss of clients’ money amounting to Sh20 million.

In a case mentioned in February 2020, Safaricom said it had contracted East African Data Handlers for its data management and recovery in March 2016.

In the agreement, the data company was to recruit merchants to the Buy Goods platform and it received various amounts from transactions conducted through the service.

However, in breach of the terms, the data company allegedly did not remit the money collected from merchants and some users wrote to Safaricom, demanding payment of the various transacted amounts.

Safaricom accused Mr Kariuki’s company of not reconciling all payments received on the M-Pesa platform and failing to settle the merchants’ accounts directly after receiving a withdrawal request instruction.

This led to major losses, with the telco claiming Sh20.3 million from the data firm.

They terminated the data firm’s contract in the wake of the row.

In Azimio, they picked George Njoroge as the ICT chief and he handles all matters dealing with technology.

Njoroge has served at East Africa Data Handlers as Managing Director of the company since its establishment 15 years ago.

Since 2016, he has also served as CEO of a newer venture — Alternative Pulse Plc, trading as Go Pesa.

The firm describes itself as a ‘mobile merchant platform powering over 10,000 merchants in Kenya.

Njoroge holds a Bachelor of Science in I.T from the Jomo Kenyatta University of Agriculture and Technology (JKUAT).

His professional career has seen him hold several key IT roles in the private sector.

In 2004, he spent 10 months at Microsoft before moving on to Sahara Computers as IT Manager for Kenya and Uganda.