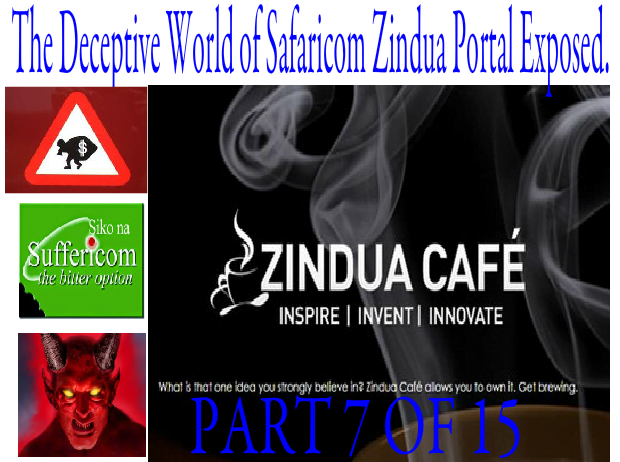 Safaricom has very many Intellectual Property cases in courts. That is a fact. Before  starting to investigate Safaricom, I vowed that Kenyans must Know the truth about this company, how it operates and what they are up to. This is a journey that cannot be stopped, this is a war that must be won.

Still on Intellectual Property question marks, I was shocked when I saw Safaricom launch the interactive portal dubbed Zindua Cafe’. According to Safaricom, innovators and developers countrywide will share their Ideas, Applications and Prototypes with Safaricom.

This is a Trap dear Kenyans. First let me Remind you about these popular copyright infringement cases against Safaricom.

In 2012, An innovator filed a suit over money transfer Mpesa. The innovator going by the name Christopher Ondieki sued Safaricom saying he invented Safaricom’s Mpesa Upgraded Technology that allows users to transfer cash in US Dollars and Ksh to and Fro banks.

How did Mr Ondieki lose his great idea ? Mr Ondieki forwarded his proposal to Safaricom and was invited to demonstrate his invention but instead of finalizing the deal, Safaricom went ahead to implement it without his consent – Business Daily Africa Reported

A Nairobi startup that develops mobile money for rental payments also accused Safaricom of stealing its idea after they proposed a partnership with the company.

Founder Steve Ngethe was shocked when he saw Safaricom Unveil Lipa Kodi product. Steve and Safaricom had discussed potential partnership their target being the real estate agents and developers. According to popular Tech Blog Humanipo, there were email conversations between Njoroge and Kennedy Luhambo of Safaricom business Development department. The cold fact was that Steve was in talks with Safaricom over forming a Joint Venture.Steve was shocked when he heard about Lipa Kodi through the media. The only name that was changed was the middle one . ” Lipa Rent TO Lipa Kodi. ” The idea resembled mine with only the name changed ” Lamented Steve.

Safaricom Maliza Storo is also a stolen Idea. The maliza storo service allows one to access airtime on credit for a fee up to 10% for each request.

Faulu Kenya filed a lawsuit in Kenyan high court seeking to halt Safaricom from operating Mshwari arguing that it was similar to its Kopa Chapaa. Kopa Chapaa service had been operational for one year before Mshwari was launched.

According to Faulu, they had pitched to Safaricom the idea of mobile money service that allows customers to save, borrow loans and earn a certain percentage in interest using mobile phones.

It is during this pitch that Faulu foolishly presented to Safaricom a prepared concept with full details documenting how the system was going to work. Faulu Kenya entered into a non- disclosure agreement that Safaricom faithfully disregarded.

Safaricom is interested with start Ups yet they have not cleared their name. The above mentioned cases keep haunting them and that is why innovators must be keen. The devil will always promise to help you but there is nothing for free. According to Safaricom, they were forced to come up with the Zindua Madness because they need more ideas. How sure are you that you will benefit in case you come up with a great innovative product .

Lets not forget history. A friend wanted to discuss his idea but changed his mind after I gave him the fact. Even the Bible says my people are suffering because they lack the knowledge.

My word to young innovators out there is to be very keen, Let nobody cheat you that they care about you yet their aim is to steal your Idea and make bucks while you languish in poverty.

Soon you will hear cases like ” I presented a great Idea to Safaricom through their Zindua Portal and it has been implemented without my consent ” Safaricom will then issue a lengthy statement saying those are malicious claims. Surely, Time never lies