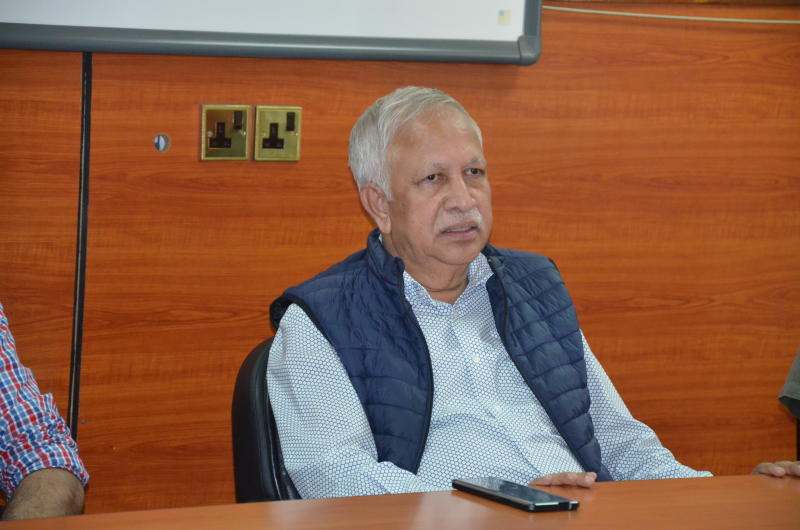 The uncertain fate of the collapsed Mumias Sugar Company continues to hang in the balance as stakeholders eagerly await the court’s final determination on December 15, 2022.

In the contempt of court case filed against Uganda-based Sarrai Group, the firm is accused of operating in Mumias Sugar under protection of local politicians despite a court order in April directing the company managers and its staff to cease operation in the sugar miller.

In July 28, High Court Judge, Lady Justice Wilfrida Okwany, directed that neither the Sarrai Group nor their affiliates should foot at the miller premises until the case is determined.

The order prohibited any activities, including the operation of machinery, dismantling, vandalism of machinery, and removal of assets stored and situated within the premises of Mumias Sugar Limited.

The court further upheld its judgement issued on April 14, 2022, that nullified the lease granted to Sarrai Group on December 22, 2021.

The company had already begun works and even pumped money into reviving the collapsed sugar mill, but the court stopped the process after several bidders challenge the bid.

The fall of Mumias, which at its peak controlled nearly 60 percent of the country’s total sugar production at its prime, and the subsequent collapse of other state-owned millers left the space to be occupied by crooks from the private sector.

As the legal battle progresses in the corridors of justice, details of the cabal of sugar barons propelling the well-oiled lawsuit have remained scanty.

At the centre of the heated controversy lies a little-known Dubai-based entrepreneur, Kristian Khachatourian.

He is the director of “Vartox Resources Inc” in the United Arab Emirates, whose trail we trace to the infamous Panama Papers.

Sources link Khachatourian to Jankle Group Limited as a shareholder. It is said to be an intermediary firm of Mossack Fonseca & CO. (UK) Limited.

Khachatourian (through Vartox Resources Inc) accuses Ponangipali Ramana Rao, the receiver manager for Mumias and Kenya Commercial Bank (KCB) of participating in a syndicate that sells distressed companies’ assets for significantly less than they are worth.

Through attorney Abbas Ishmael, Vartox argues that this is a blatant case of fraud and corruption.

In the affidavit, Khachatourian claims that he discovered a market pattern where Mr. Rao is a prevalent factor in large corporations where assets of great worth are at stake.

They submitted their affidavit to oppose an appeal filed by Gakwamba Farmers to overturn a high court decision that had annulled the lease granted to Sarrai Group.

However, Justice Alfred Mabeya dismissed the request filed by Gikwamba farmers and went on to question how Mumias assets that had secured loans from Eco Bank and French Development Agency Proparco shifted from the two banks to Victoria Commercial Bank.

The judge declared that the papers were filed too late in the day.

Despite the dismissal, Gikwamba filed another case over the same issue.

The five supported West Kenya Sugar Company’s argument that it ought to have been the preferred bidder after quoting the highest amount of Sh36 billion.

Mr Rao denied the claims, saying he was complying with court orders.

There are ongoing court proceedings where TSS assets worth enormous sums were sold for 50 percent of their value.

“In the case of Tahir Sheikh Said Grain Millers ltd (TSS), it is evident that KCB, Rao and the persons behind Sarrai were part of a scheme to defraud creditors as well as shareholders,” notes part of the damning affidavit by Khachatourian.

He further alleges that following the judgement of April 14, 2022; it came to light that TSS was a distressed company since Rao was appointed administrator in 2016, and whose administration has been continually extended by the high court year after year.

TSS is said to have owned a number of assets, including a grain milling facility, equipment, silos, and other mobile assets erected or operate on immovable property.

Despite receiving an offer of Sh810 million for all the movable goods. ao allegedly sold them all for Sh350 million in December 2019.

The property appears to have been transferred by KCB to a third party in 2017 under circumstances that are unknown.

KCB was then charged with the property in order to get a facility for Sh600 million.

The buyer of the real estate and transportable property, according to court papers, was Jamii Flour Millers Limited.

Less than a month after obtaining the movable property and the assets, the firm allegedly changed its name to Ustawi Grain Millers limited (Ustawi) in January 2020.

According to Khachatourian, it is Sarbjit Singh Rai, Amaanraj Rai and Rajbir Rai who led the Sarrai group to own and control Ustawi.

In addition, he informed the court that the shareholders of Sarrai are the same people, and less than a year after Ustawi purchased the property for Sh300 million, Ustawi used it as collateral to receive a loan for USD 14,715,000 (about Sh1.4 billion).

He worryingly expressed Rao and KCB’s conduct in the TSS case is reminiscent of their sinister goals in the Mumias case, questioning the choice of Sarrai as the lessee of Mumia’s assets despite having made the lowest bid.

Fears are rife that Mumias may have the same outcome as TSS and have its assets pillaged if Rao and KCB are granted permission by the Appellate court to obtain the directives they desire.

As things stand, at least half of the sugar produced in Kenya is now controlled by one man after the billionaire Rai family opened their fourth milling plant in Bungoma.

Naitiri Sugar Company, which started milling in May this year, is the latest addition to the family’s sugar conglomerate that now spans across the country.

The new plant affirms Rai’s position as the leading sugar manufacturer from a combined capacity of his existing three mills in West Kenya, Olepito, and Sukari.

The new player adds at least 6,000 tonnes of sugar per day, a move that will increase the supply of the commodity in the country and cut cheap imports.

Data from the Sugar Directorate shows that Rai’s sugar factories control up to 43 per cent of the total production in the country.

Rai’s appetite for investment in sugar manifested last year when through his West Kenya Sugar Company, placed a bid for the lease of Mumias Sugar Company.

However, KCB’s receiver manager, in court documents, said he refused Rai’s bid to lease the ailing miller as the move would have given him a dominant position in the sector.

They gave the controversial lease to his brother’s Uganda-based conglomerate, which also operates sugar plants in the neighboring country.

Courts later stopped the tender after West Kenya moved to challenge the award.

Sarrai Group consists of different Agro-manufacturing companies with operations as far as Malawi.

They run three factories in producing about 170,000 tonnes of sugar annually.

The Rai family is synonymous with conflict.

Last year, Sarjij Kaur Rai (now deceased), the wife to Tarlochan Singh Rai, teamed up with her sons, Jasbir and Iqbal, objecting to the will claimed to be written by the matriarch, saying someone might have coerced him into crafting the document that distributed his assets among eight beneficiaries.

In 2020, West Kenya was among the investors who eyed the leasing deals for the five State-owned sugar factories.

The Kabras-based miller showed interest in running Chemelil, South Nyanza, Nzoia, Miwani and Muhoroni sugar mills on lease terms as part of reforms by the government aimed at reviving the ailing factories.

Between 2019 and last year, West Kenya Sugar Company invested more than Sh1 billion in cane development largely in Nyanza, western and parts of the Rift Valley to create a sustainable supply of to its factories.

The Kabras-based miller has contracted more than 200,000 farmers who are spread across nine counties of Busia, Kakamega, Bungoma, Trans Nzoia, Uasin Gishu, Kericho, Kisumu, Vihiga and Nandi, giving it the largest sugar catchment in the country.