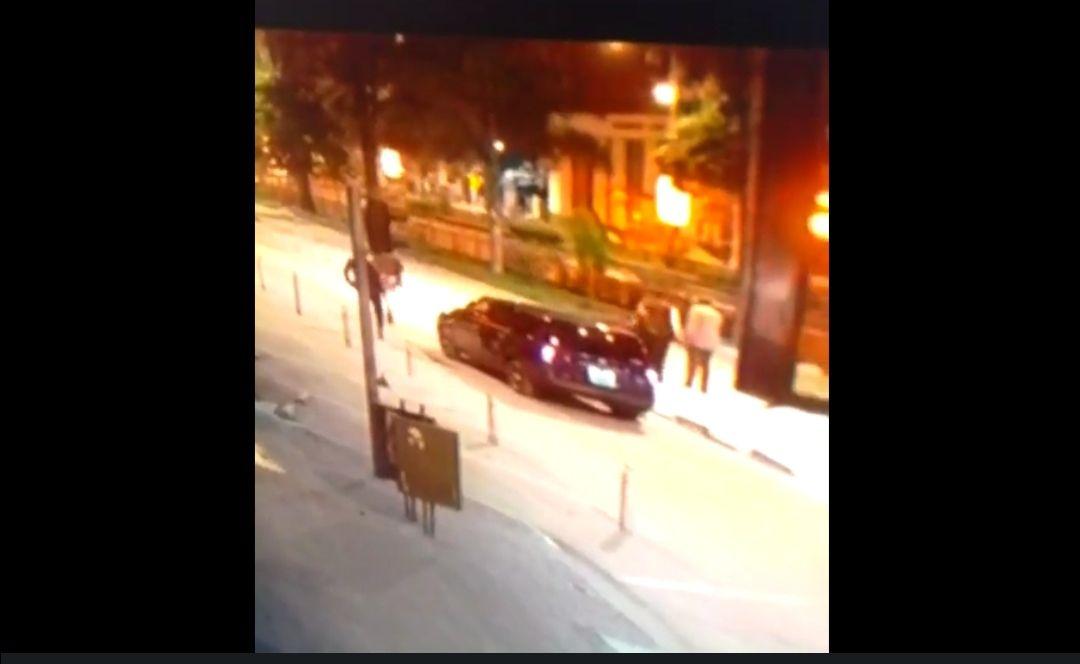 A CCTV video appeared online on June 2nd 2020, showing President Uhuru and ODM Leader Raila being dropped off from a Toyota Probox at what appeared to be Kenyatta Avenue, Nairobi.

Turns out the police investigated the matter and arrested the duo on 6th June 2020. There charge sheet reads:

“On 2nd day of June 2020, at around 2020 hours at Nairobi County within the Republic of Kenya jointly, jointly intentionally and without authorization intercepted a security CCTV footage capturing the head of state’s entourage along Kenyatta avenue.”

After their arrest, they were taken to Milimani law courts where they were released on bail, charged with an unauthorized interception of a computer data contrary to section 17 (1) of the Computer Misuse and Cyber Crime Act.

See the video below:

In early June, the Law Society of Kenya moved to the Appellate Court to challenge the dismissal of a case filed by bloggers Association of Kenya (BAKE) over the constitutionality of the computer misuse and cybercrime Act.

Before that, in April this year, Blogger Cyprian Nyakundi was charged for alleged publication of false information, contrary to section 23 of the Computer Misuse and Cybercrimes Act. The blogger vowed to challenge the law according to an unafilliated fan page that often broadcasts his thoughts.

Every day, we see the partiality in the application of the law by @DCI_Kenya. When things stabilize I am going to court to challenge the Cyber Crime Act having been charged under it.

In the civil application 102 of 2020, LSK told the court they are concerned that section 22 and 23 of the Act particularly limits freedom of speech and expression of the applicant and the citizenry of Kenya at large by the use of broad and vaguely worded offences that the government can wield to arrest, investigate and imprison its critics and dissenting voices on Covid-19.

This Act ladies and gentlemen, especially YOUTHS seeks to even criminalise Cybersquatting. Where can we, after being oppressed and denied a chance to work due to deliberate bad policies and collapsing of the economy are we supposed to get money?

The arrest and prosecution under such draconian law must be resisted by Kenyans. The media had celebrated when the Computer Misuse and Cyber Crime law was brought back saying that it will now ‘teach bloggers a lesson’, not knowing that they too will be crushed under the boots of the dictator.

When blogger Nyakundi won against section 84D of KICA, the judge had rightfully observed that leaders ought to take up criticism and act on issues raised by the citizens.

Though the respondents have supported the reinstatement of the draconian law, LSK pushed further in its submissions, stating:

The law which penalised sharing obscene materials/vulgar materials in electronic form about a person was declared unconstitutional by Lady Justice Wilfrida Okwany.

“Any person who publishes or transmits or causes to be published in electronic form, any material which is lascivious or appeals to the prurient interest and its effect is such as to tend to deprave and corrupt persons who are likely, having regard to all relevant circumstances, to read, see or hear the matter contained or embodied therein, shall on conviction be liable to a fine not exceeding two hundred thousand shillings or imprisonment for a term not exceeding two years, or both” – Section 85D of the Kenya Information Communication Act (KICA).

The High Court judge while delivering her ruling in 2019, for a case the blogger filed in April 2018, said that that law is vague and broad, making it hard for accused persons to defend themselves. She further said the section was against Article 33 on freedom of expression and Article 25 (C) on the right to fair trial.

“The section is unconstitutional in so far as it suppresses freedom of expression and denies and accused right to fair trial through ambiguity. It is vague. The law creating a criminal offence must be clear. The section is retrogressive to an open, modern and democratic society,” she ruled.

The Kenyans government has been very cheeky to return, through the backdoor, elements of the above law.

The first person to be arrested after this draconian law was reinstated by Justice James Makau, was Elijah Muthui Kitonyo.

The govt is the one that put the ‘fake’ sticker on the image, not cnyakundi.com

“Elijah Muthui Kitonyo aged 23 years has been arrested in Mwingi for publishing misleading and alarming information on Coronavirus. He will be charged for publishing false information that is calculated or results in panic contrary to section 23 of the Computer Misuse and Cyber Crimes Act of 2018,” DCI announced that time.

When Justice Makau overturned Justice Odunga suspension of 26 sections of the draconian law, the mainstream media had celebrated the move calling it ‘a final and good attempt at fixing and shutting down bloggers for once, ostensibly that their revenues are kept intact’. However, experts warned that the law is bad for both bloggers and mainstream media.

That’s why Cyprian Nyakundi will fight for freedom of speech and for upcoming bloggers.