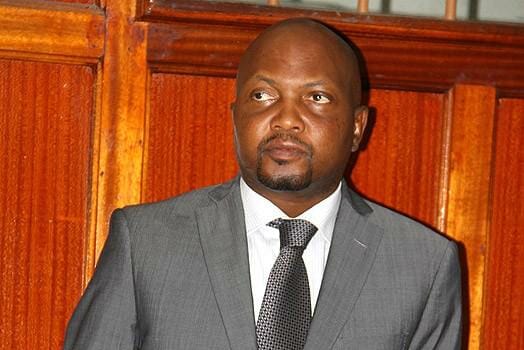 After the pressure from NCIC, Moses Kuria decided to deactivate his Facebook and Twitter accounts. 8 days ago, National Cohesion and Integration commission  withdrew from the conciliation process due to lack of co-operation from Moses Kuria.

“WHILE THE CONCILIATION PROCESS HAS BEEN IN PROGRESS, KURIA HAS CONTINUED TO POST MATERIAL ON HIS SOCIAL MEDIA ACCOUNTS THAT IN THE OPINION OF THE COMMISSION MAY CAUSE DISHARMONY AND ARE IN CONTRADICTION TO THE SPIRIT OF CONCILIATION,” Kaparo said in a statement

This prompted him to deactivate his Social media accounts. According to sources, the pressure was too much. Moses Kuria is facing hatespeech charges that have seen many Kenyans accuse the government of applying the law selectively.

But that has not stopped him from spreading fear. While Boniface Mwangi was on JKL, Moses Kuria sent a message to Jeff Koinange telling Boniface Mwangi to stop talking about Mama Ngina  ” Leave Mama Ngina alone, I am her MP and I am not going to take this lying down ”

A shaken Boniface Mwangi said that he has always been receiving threats from Moses Kuria and  added that Kuria has also been threatening his wife . He said efforts to report to  Moses Kuria to the police  have been fruitless – they said they cant arrest him because he is a close ally to the president- Boniface Mwangi Added . According to Boniface Mwangi, Moses Kuria is a criminal who should be in Jail