As we all know, Cyprian Nyakundi’s Twitter account was coincidentally suspended on the same day Twitter executives Ramone Martin and Adrian Ciesielski visited the country. The two attended a Safaricom sponsored Blaze event in Mombasa and then proceeded to Standard Media Group through an invite from Carole Kimutai, a former staffer at Tuko, one of the many blogs that had filed fake DMCA claims against Nyakundi’s Twitter account. 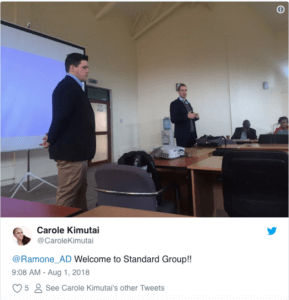 Caption : Twitter Executives at Standard Media Group during their visit to Kenya.

Nyakundi is not new to the hate and attacks. Being one of the biggest self-made media personalities in the country definitely comes at a price. Having taken the industry by storm and gaining such a huge following, he has a lot of enemies yearning for his downfall.

One of these people are ScanGroup. An agency whose employees have been lobbying for the suspension of his Twitter account for the longest time now. In fact, some of them made sure they reported the account at least twice a day. A close source tells us that immediately the news of his suspension reached the office, everyone broke into a celebratory mood. The giant had finally been slayed, or so they thought. 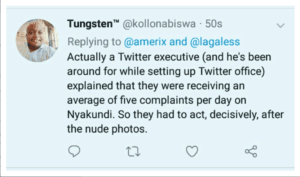 Caption: Nation Journalist who attended a private meeting which was recently held by Twitter executives. 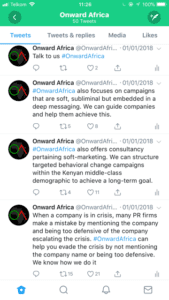 Caption: Tweets made by the Onward Africa account are strictly about the company and not opinions by Cyprian Nyakundi.

All this happened as the two Twitter executives were in the country. A clear sign that Twitter has launched a personal war against Cyprian Nyakundi influenced by his competitors who want him gone from the micro-blogging platform forever. In fact, Twitter recently suspended dozens of accounts with the name ‘Nyakundi’ just to make sure he hadn’t opened a new account.

The most interesting thing is Twitter never issued any warning to Nyakundi regarding his posts prior to his suspension. They never gave him a chance to defend himself, they simply marked him guilty and shut down his account. 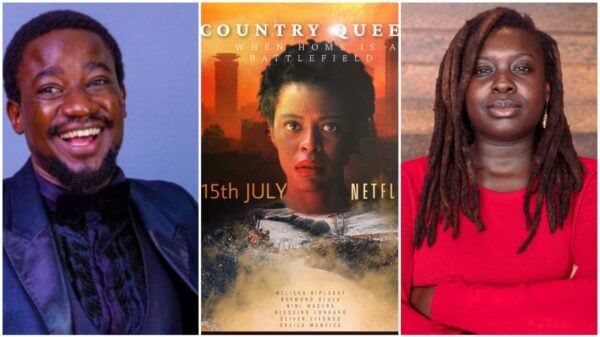