President of the Law Society of Kenya Nelson Havi has distanced himself from the plots being cooked to unlawfully kick out Chief Justice Maraga.

Havi said that the society will take appropriate legal action against any intentions to proceed with the ‘unlawful’ bid to kick out CJ Maraga who retires in January.

LSK President was responding to Macharia Njeru, LSK representative at the JSC, who accused Maraga of frustrating recruitment of his successor.

Njeru said there are external and internal forces working with the CJ to influence the choice of the next Chief Justice.

Njeru’s drama is coming out when Maraga is due to proceed on terminal leave on December 15 before he retires on January 12, 2021.

He got wild after Maraga cancelled a meeting on Friday pushing him to rope in the Deputy Chief Justice Philomena Mwilu, and Justice Mohamed Warsame whom he accused of opposing the commencement of the recruitment process. 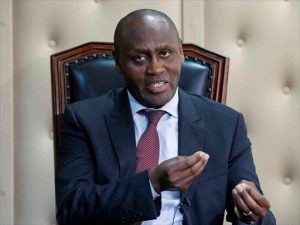 The meeting that the CJ cancelled was planned after a stormy on September 30 when the JSC’s sub-committee steering the recruitment availed its report.

“After lengthy deliberations of over three hours, the Chief Justice asked for an adjournment to October 16 (today) to allow for consensus other than a vote to decide the crucial process,” Njeru complained.

He added that the two commissioners are pursuing a cause whose results will dent the image and credibility of the commission.

Havi dissociated the society from the plot as he revealed that some senior government officials are not happy with Maraga’s firm defence of the rule of law and constitutionalism in the Kenya.

“The society, therefore, dissociates itself from the position taken by Macharia Njeru and Mercy Deche. The state capture of the Judiciary and the JSC cannot be executed through representatives of the society,” he said.

He added that LSK will have to consider whether to retain the two commissioners as its representatives at the JSC or not but he clarified that the recruitment of the CJ and the deputy CJ is regulated by Section 30 of the Judicial Service Act.

And that the recruitment of the CJ and the deputy can only commence after a vacancy occurs in the two positions.