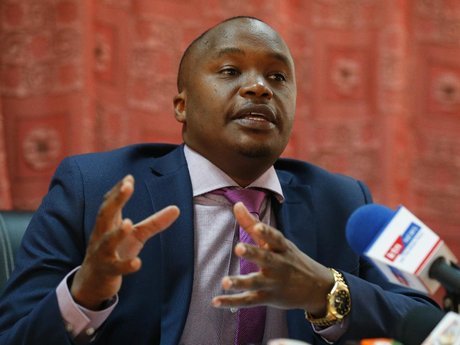 Social Media users are demanding for the arrest of Starehe Member of Parliament Jaguar after his xenophobic remarks as jitters are reported in Tanzania over his remarks.

Tanzania’s Speaker of Parliament Job Ndugai ordered the Government to issue a statement on the safety of Tanzanians in Kenya following a statement by Starehe MP Mr Charles Njagua Kanyi alias Jaguar which has been deemed to be xenophobic.

The Kenyan government distanced itself, though it is suspect because Jaguar is still a free man, many hours after making the hate statements.

A video of the MP issuing the ultimatum went viral on Tuesday.

“The other day we saw Matiang’i claiming he had only deported six Chinese nationals yet we have hundreds in here. We are giving the government 24-hour ultimatum to deport them failure to which I will lead the locals in storming their shops and ejecting them,” Njagua said.

Although the singer-turned-politician was primarily angered by the presence of Chinese traders selling second hand clothes in Gikomba market, he expounded his statement to mean all foreigners.

“We are not talking about six Chinese nationals. We are talking of hundreds of foreigners who work here (Kenya). I give the government 24 hours to evict these foreigners lest I, being a representative of this area, go into their shops, beat them and send them all the way to the airport,” he said.

@DCI_Kenya arrest Jaguar and charge him with incitement to cause violence, xenophobia and forceful eviction. This is so unbecoming of an MP where we make efforts to integrate as one community in East Africa especially. He is also politically incorrect. Arrest him.

Hey @DCI_Kenya this man is war mongering and inciting Xenophobic attacks on foreigners
Whole GOK needs to limit and control work permits we can’t go down the violence route to resolve the issue of foreigners working in kenya https://t.co/fSDeppS7yD
Kindly watch and arrest Jaguar

Is Charles Kanyi aka Jaguar still walking in the streets of Nairobi? #ArrestJaguar