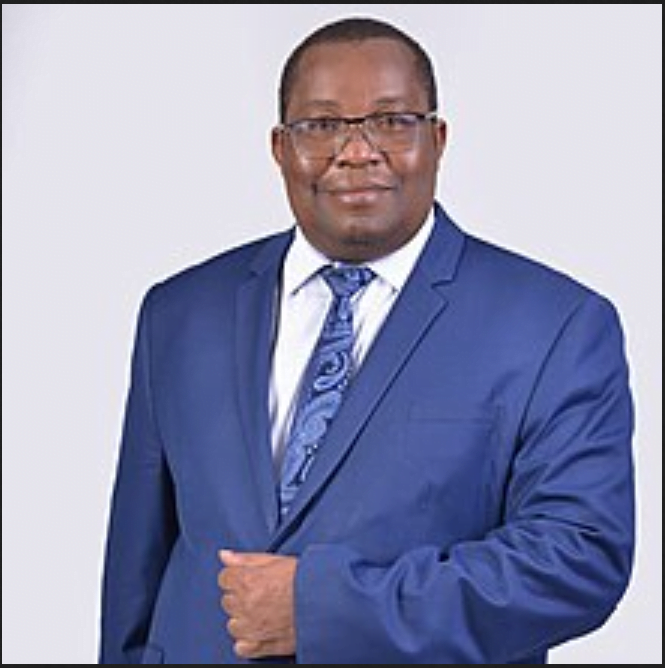 A can of worms has been unearthed at the National Museums of Kenya (NMK) where the immediate former Director-General, Dr. Mzalendo Kibunjia Nyagah, is reported to have left a long trail of plunder, graft, and nepotism during his six-year tenure.

Trusted Insiders within NMK have accused the Tharaka Nithi County gubernatorial aspirant eyeing the seat under Martha Karua’s Narc Kenya party of going against all his big promises when he was first assigned to the state corporation back in 2014.

On the contrary, his leadership turned out to be a disastrous nightmare.

His appointment saw the birth of constant staff intimidation, nonpayment of dues, and oppression of labor leaders.

He successfully crippled the workers’ union, and this effectively ensured that things like annual wage increments were a thing of the past.

This left employees exposed to rising levels of inflation.

The source further alleges that Dr. Kibunjia executed all these irregularities through the help of his loyal cronies, carefully plucked from the hundreds of his tribesmen from Tharaka, who invaded the corporation immediately after he took over.

It is rumored that the move was a ploy to gain popularity in his native constituency, where he has always been heavily involved in politics.

At the time, he sought the Tharaka parliamentary seat.

The mass employment of his kinsmen allowed him to control NMK like his personal kiosk.

This was in total contravention of the law, but all prominent mouths were too full to make any objection.

His brother, “Victor Intiga” and the head of the administration office “Mr. Sudi” control everything that involves big money.

Detectives from the Directorate of Criminal Investigations (DCI) as well as the Ethics and Anti-corruption Commission (EACC) are currently investigating the origin of millions of shillings discovered in multiple staff accounts.

The funds are suspected to be proceeds of graft.

Enlistment of ghost workers into the corporation’s payroll is also rampant.

These claims come barely two months after similar concerns were aired by a local tabloid, The Weekly Citizen Report, in a controversial story that exposed impunity, plunder, and corruption during Dr. Kibunjia’s tenure.

The popular political magazine quoted a petition filed by a Kenyan who alleged violation of the leadership and integrity act by Mr. Kibunjia.

In the article titled: “National Museum’s bones on Kibunjia table” the author shockingly reveals that days after his term expired on February 9, 2022, he kept unlawfully creeping into his office during the wee hours of the night for the purported sole purpose of backdating promotion letters, issuing transfers and making major decisions.

The positions were awarded to his key cronies, tribesmen, and several of his girlfriends.

HR reports and audit records attached in a letter received by EACC in March this year showed blatant favoritism of Tharakas and Merus in the National Museums of Kenya.

Hope you are doing great.

I have some disturbing information from the National Museums of Kenya.

I have been part of the staff here for a long time but immediate former Director-General one Dr. Mzalendo Kibunjia has left a lot of mess.

When he was appointed the DG around 2014, he promised staff heaven.

He promised parking will be full and staff would be given mortgages to buy houses and being broke would be thing of the past.

Little did we know it was all PR.

Staff were intimidated, and our Union died completely because they transferred officials to regional Museums where their voices will never be heard.

He employed his kinspeople from Tharaka in mass because he eyed that seat during the time.

Staff did not get their annual increment for years for reasons best known to him.

Any government employee is entitled to an annual increment because of inflammation.

His Brother one Victor Intiga, and the administration office led by one Mr. Sudi are doing everything concerning big money.

He took Museum’s official car (Prado) for his campaign.

As I am writing this, EACC and DCI having been doing an investigation for the last three weeks.

Some staff accounts were found with millions of shillings and word is that we have over five hundred ghost workers on a double payroll.

Kindly hide my identity juu this thing is very sensitive which can cost me my job.

The story I have attached below was on the Citizen Weekly two weeks ago.

The information is a lot on the ground.

Sasa staff wameambiwa watumane their ID number, appointment date station, and much other information,” the source wrote to us on Friday, July 8. 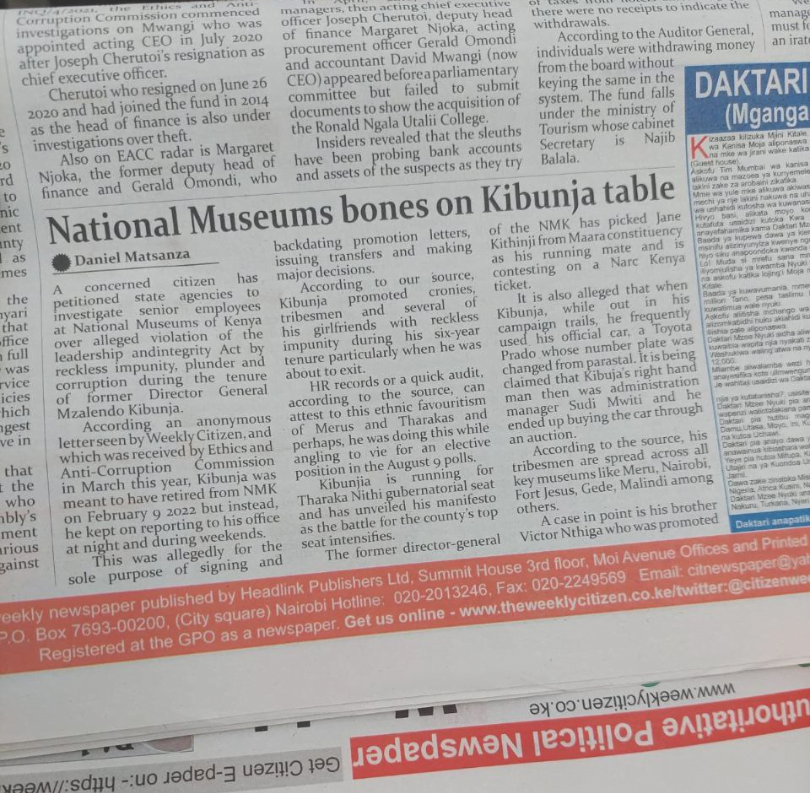 PHOTO CAPTION: A section of the Citizen Weekly Report article on Dr. Mzalendo Kibunjia’s trail of plunder, graft, and nepotism At National Museums of Kenya

Kibunjia Nyagah Mzalendo is a Kenyan Archeologist trained in Nairobi and the United States.

Before his role as the Director-General of National Museums of Kenya, a leading multi-disciplinary state corporation, he was appointed as the first chairman of the National Cohesion and Integration Commission (NCIC) a government agency intended to address and reduce inter-ethnic conflicts.

He also notably chaired the Nakuru Peace Accord agreement between the Agikuyu and the Kalenjin communities.