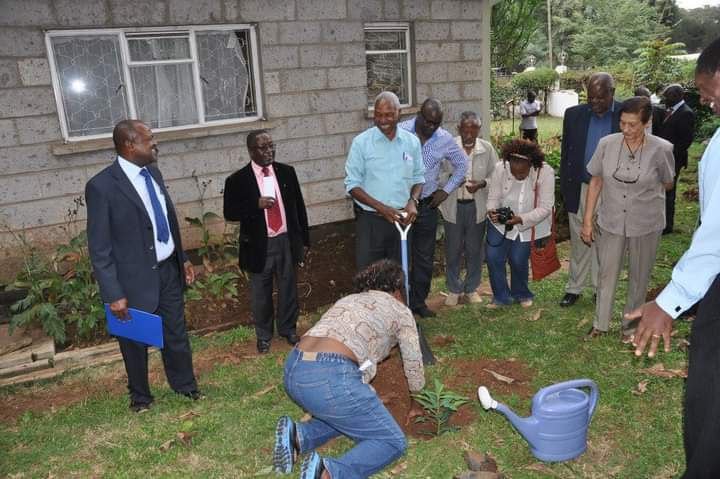 Thank you for the good job you are doing

I would like to bring to your attention about the negative developments and one of Kenya’s oldest and historical private members club – that is United Kenya Club (also known as UKC) located along State House Rd and next to YMCA Club and St. Paul Catholic Chapel.

The board comprises of 13 members/directors elected amongst the Club Members. Normally each director is eligible to serve as maximum of two terms.

Each term is 3 years.

So normally after around 2 years, there is change of directors, through elections held at the annual AGM.

The trouble is we have 6 directors who are due to retire, having completed 2 terms and even exceeded 6 years in the board.

These directors are: Dr. Ogara (current chairman), Dr. Pamela Olet; Professor Kemoli; Dr. Kiura; Mr. Peters Awuoundo and Beatrice Okoko. They have been directors since 2014 and are illegally in office having exceed their terms.

The Club normally holds its AGM in November but the former Chairman, Dr. John Ondeko used the excuse of COVID-19 to suddenly cancel a virtual AGM in November 2020 in a bid to extend his term, having himself been in the Board for more than 8 years. 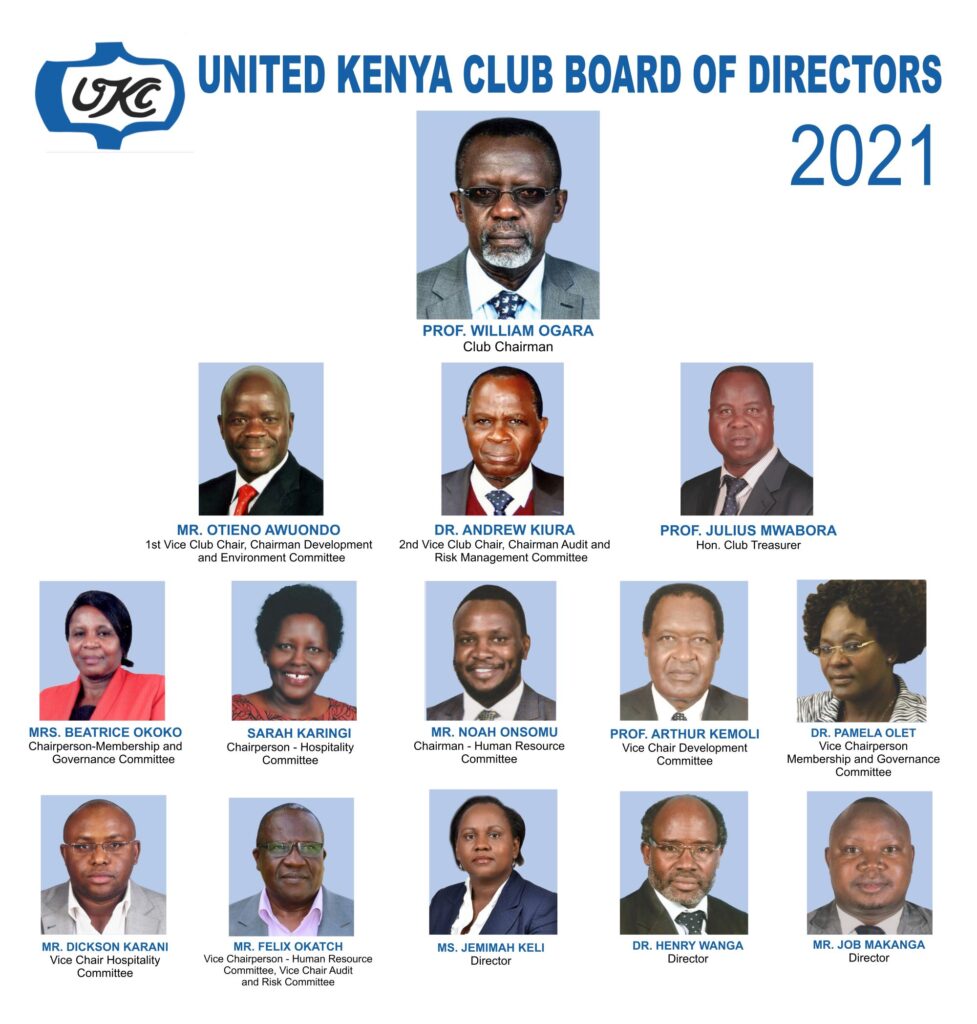 United Kenya Club – Board of Directors

Last year, due to pressure from Members, the former chairman, Dr. John Ondeko called an AGM in June 2021 and he thereafter stepped down. The Chairman, Vice-Chairmen, Club Treasurer and Board Committee chairpersons are elected by the directors themselves.

The problem is Dr. Ondeko has captured the Club by manipulating the membership over the years and having some of them hijack the AGM of 2018 and 2019 to grant him an extension of his term as Director and Chairman. This is an illegality as it goes against the Club’s Articles and Memorandum of Association.

The United Kenya Club is registered as a company.

Despite having reluctantly left the board, Dr. Ondeko through some members, has been advocating for creation of a role of Club Patron. He is targeting this role and is seeking to empower it to supervise the board so that he continues his role as “Chairman” lording over the Club Board.

The Club’s Articles feature a Patron role, which has been dormant since the early 80s, last held by Charles Njonjo. This Patron role is ceremonial and honorary and given to a respectable member of society to help build publicity and image of the Club externally and not lord or interfere with the Board of Directors or the day-to-day running of the Club’s Affairs.

During the last AGM held on a Saturday afternoon in June 2021, the same former director used some crocked club members to try and introduce a motion late in the evening and the meeting for creation of a Club Patron role. A motion members found sinister as there is no leadership vacuum in the Club.

This motion was shut down. 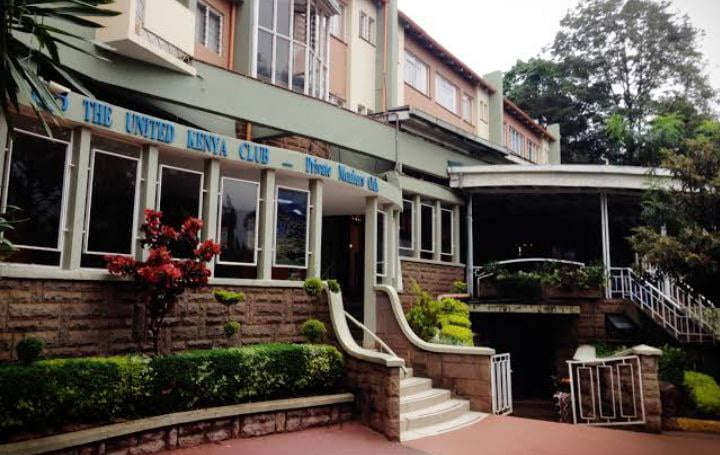 However, his proxies in the Board who are also all the above listed directors meant to have long exited the Board led by Dr. William Ogara of UoN have for the past one year been agitating for creation of this role, holding secret meetings with the former chair and his agents to create amendments to the Club Articles and Memorandum of Association to mutilate these documents and create the role of a team of patrons (not one now, but 7) to oversee the Club affairs, usurping the Board legal mandate but without taking accountability for the same. In their words, they want to create a powerful “senate” to supervise “parliament i.e. the Board of Directors, which is the body with legal mandate to run the Club

This week on Thurday 28th November, the current Chairman and the above listed directors have called for an Extra Ordinary General Meeting (EGM), to push their motion for creation of a very powerful Council of Patrons. These patrons will be occupied by the 6 outgoing directors listed above plus the former Chair who will be the Chair of Patrons.

See attached the notice of EGM and proposed changes in articles and memorandum of associations to enable these illegal changes.

This group thinks that they “own” the Club and are very tribal and want it to remain as its perceived as a “luhya”-base.

Instead of calling for an normal AGM as dictated by the Club’s Constitution, this group has called for an EGM with the home of using this eleventh-hour to elections climate to hurriedly create these roles whilst the attention of members is on the elections.

They hope that once passed, they will hurriedly resign as Directors and jump in to the new Council of Patrons then hold sham elections of directors to replace the 6 outgoing ones – six directors remain in office until their terms expire.

Please bring this to the attention of the public.

This club is where many meetings were held about independence of Kenya and the future of this country after self-rule.

However, it has experienced bad leadership due to tribal leaders such as this cabal.

Members are disgruntled by this move and are planning court action tomorrow or before the EGM to stop it and if they fail, they will be trouble during this Thursday’s meeting to be held at the lounge of the Club.

Kindly use your website and wider social media reach to expose this cabal that wants to hijack an old members club.

Our Club is in trouble financially and compliance-wise. It owes Kenya Revenue Authority (KRA) over Sh12Million. For this reason, in January 2022, KRA wanted to close down the Club.

The Club owes Retirement Benefit Authority (RBA) for staff retirements payments; it owes the staff SACCO, staff deductions not remitted as well as suppliers and vendors.

EGMS are held as a matter of emergency and the emergency in this case is not the above issues like financial survival of the Club but rather a few self-seeking old men and women refusing to vacate leadership positions for new members.

Please highlight this long story but critical, this Club has long history and respect but is hijacked by a few bad apples who are seeking dynastical and tribal tenure.

Thanks and keep up the good work.