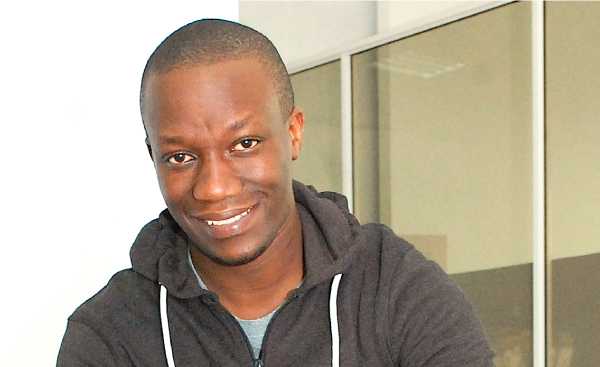 Serial tech entrepreneur Sam Gichuru has once again found himself on the wrong side of irritable netizens.

This time around, the “Nailab” and “Kidato” CEO wrongly rubbed the shoulders of local IT experts by sensationally claiming that Kenyan software programmers are an incompetent bunch.

The intense Thursday afternoon conversation was sparked by a screenshot circulating from Telegram which reportedly captures Mr Gichuru’s point of view when he recently spoke to a local blogger on matters Kenyan startups and challenges facing the growing industry.

Apparently, he is of the opinion that part of the reason the sector is faltering compared to regional neighbours is poor work ethic and unprofessionalism from our local tech developers.

According to him, this is extremely bad for business, and as a result, he advised those venturing into the risky business against working with such characters who he says are lazy, disrespectful and dishonest.

“However, an interesting conversation came up about Kenyan developers.

He has had a wider engagement with them and this is what he told me.

‘If you can avoid our local tech developers, the better for your business.’

He said Kenyan Devs are lazy, incompetent, disrespectful and dishonest.

Their work ethic is poor, and their professionalism is uncouth.

I had to agree with him,” reads part of the post shared on “The Warriors” Telegram channel. 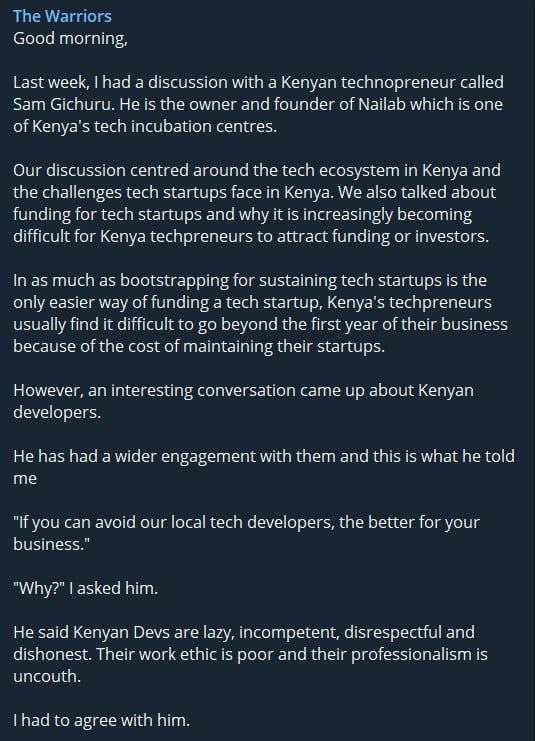 This did not seem to go down very well with most Kenyan developers, who were quick to issue their witty rejoinders.

In their defence, most startups are simply getting projects worth the value of their poor investments in developers.

With almost all the top talents already poached by well-paying multinational firms, they argue that the only way to get quality work is forking out the right amount for it.

Unfortunately, this is something most local startups are unwilling to do.

“Just walk into these startups and ask to see how much they pay developers against their revenues. It’s sad,” one wrote.

“These guys want to develop million-dollar startups, but pay the devs who build them nothing,” another added.

This is not the first time Sam Gichuru has landed in hot soup over his uncompromising opinions.

Sometime in 2019, he faced heavy backlash after a terrible attempt at explaining why he thought tech interns should not ask for payment from companies.

He instead argued that they should make sacrifices and use such opportunities to earn an extra buck by finding needs to fulfil beyond the internship.

Some of the suggestions he made was for interns to sell “Mandazi” to colleagues at the office.

“In that office, find needs you can fulfil beyond your internship.

In most offices, you can ask permission to bring ‘Ndaos’ and cakes to sell to staff members and it will be ok,” he wrote on a viral Twitter thread that has since been deleted.

However, the story can still be accessed via the link shared below.

In case you are wondering, yes, that is when netizens coined the hilarious nickname “Mandazi Mogul”.