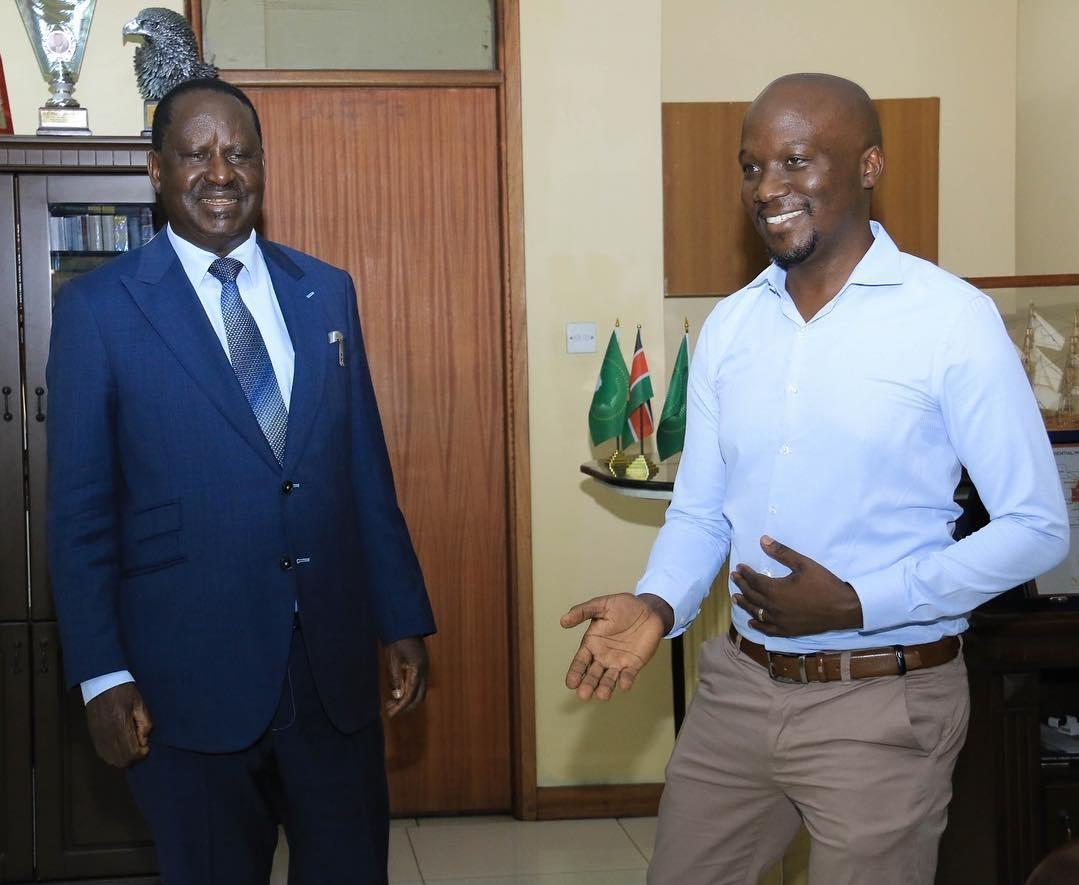 Hardly a week to the general elections and a huge storm is brewing within Former PM Raila Odinga’s Azimio La Umoja camp, pitting members of his digital team against the campaign’s press secretary Dennis Onsarigo.

In the latest turn of events, the group of angry bloggers have come forward to vehemently refute a report published on this weekend’s Saturday Nation which listed them as part of a prominent team of political influencers who have reportedly been receiving payment to push Raila Odinga’s agenda across the web.

Popular Twitter accounts namely; Jane Kyalo, Thomas Sankara, Anyama wa Anyama, Evans Olando, Eddy Illa, Kamisa Kinyua and John Kihara were also alleged to be part of Odinga’s team that runs and coordinates most of its operations from his presidential secretariat in Lavington and a command centre in Karen. 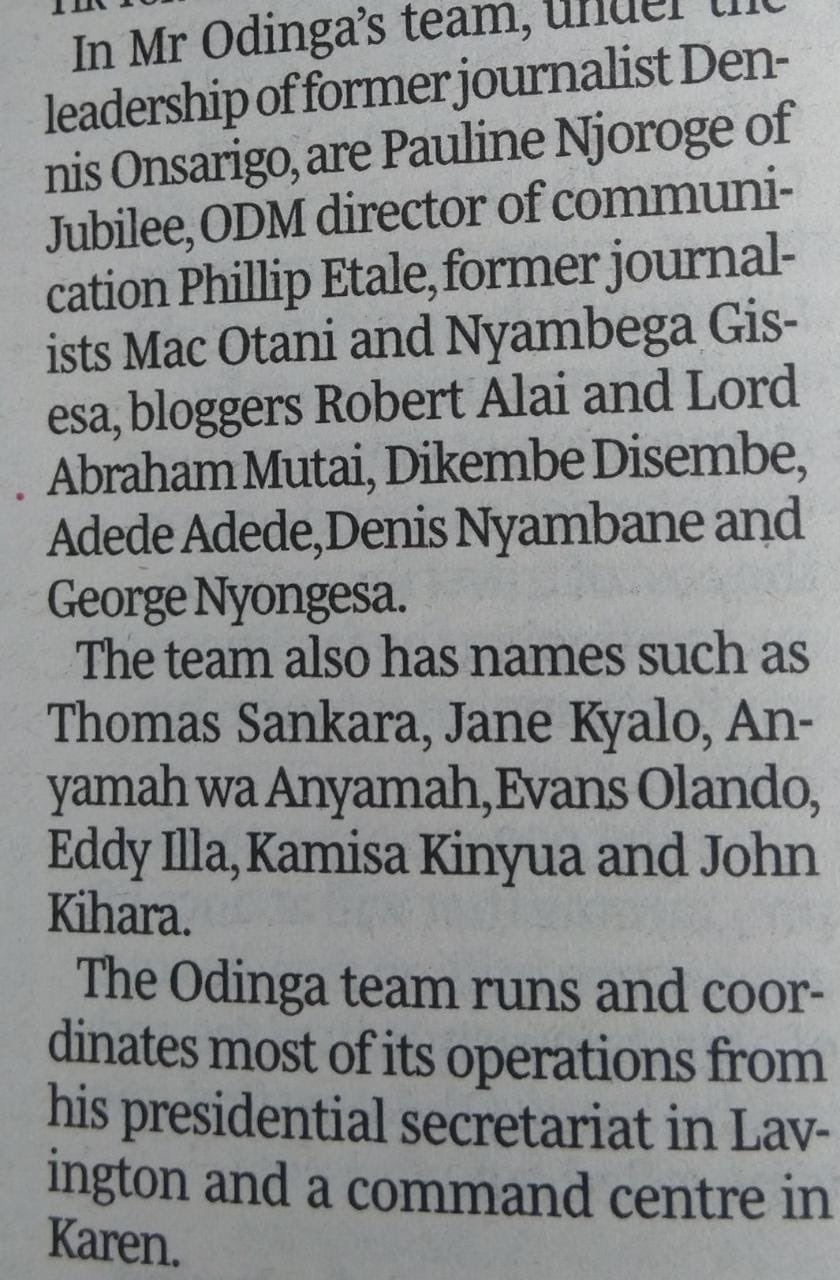 Word on the streets is that Mr Onsarigo has been pocketing over Sh200k daily, solicited under false assertions of reimbursing the team for their hard work.

But as it turns out, the whole thing was a hoax!

This has been confirmed by most of the victims, who strongly distanced themselves from Onsarigo’s activities.

Some bloggers, like Abraham Mutai, quickly made it clear that their work has solely been voluntary, and that anyone who has been minting allowances in their names is simply defrauding the Azimio campaign.

“At the risk of sounding CANTANKEROUS, I must PUBLICLY give a response to today’s SATURDAY NATION for claiming that I’m being paid by AZIMIO secretariat. I’m a VOLUNTEER. I have NEVER BEEN PAID by Dennis Onsarigo or anyone in AZIMIO. We must BE HONEST with each other.

I have always VOLUNTEERED alongside other Kenyans of goodwill like Donald Kipkorir.

Anyone who is drawing allowances in my name ANYWHERE within AZIMIO LA UMOJA campaign is DEFRAUDING the AZIMIO campaign. The money doesn’t come to me. My efforts have always been volunteering.

Let those claiming they are paying us come out and say who they are paying the money to because it’s not me! As Abraham Mutai, I remain optimistic that AZIMIO LA UMOJA will prevail.

We can’t be volunteering for the course, then someone comes along to take credit. We won’t. Let alone accept that,” the digital media consultant, strategist and expert wrote in a series of fiery tweets on Saturday afternoon.

This was confirmed by flashy city lawyer Donald Kipkorir, who confessed establishing a volunteer social media team for Raila Odinga, made up of his “BFFs” Dikembe Disembe, Abraham Mutai and Amb. Gordon K’achola.

“THE TRUTH: With some of BFFs, I established and Chair a volunteer Social Media Team for Raila Odinga its management are Disembe, Mutai and Kacholla.

They don’t report to anyone. Media shouldn’t take away the trio achievements and credit strangers. We aren’t paid for it,” he tweeted on Saturday evening.

On his part, Dikembe Disembe blasted Mr Onsarigo of being desperate to take credit for a team he failed to assemble and went hire “lazy journalists” to splash names out random names on the newspaper.

“People now desperate to be seen to be leading teams they failed to assemble, so they go hiring lazy journalists to splash names they know will give them credibility to continue posturing as ‘heads’, as they continue stealing from the campaign. You are shit. You know yourselves,” he wrote.

Philip Etale also distanced himself from the allegations.

“For the record, I am not and I have never worked under Dennis Onsarigo.

Minions should not take credit of what they never built. So such nonsensical articles can only be read by ignorant humans,” he angrily protested.

“Dear Dennis Onsarigo, or Azimio Secretariat, I was recruited as a volunteer by Donald B Kipkorir. We have never been paid by the secretariat that you guys seat in. Though we’ve heard stories that you withdraw up to Sh200K per day on our behalf. Stop sponsoring articles on Nation Media Group,” added another enraged blogger.

Despite mounting pressure, Onsarigo, an experienced journalist who has worked with two leading media houses namely The Standard Group and Nation Media Group on the investigative desk, is yet to issue a response to the scathing allegations facing him at a critical point in the road to the August 9th polls.

Instead of clearing the air, he has been busy endlessly launching attacks targeting Deputy President William Ruto and his Kenya Kwanza campaign team, oblivious to the mess inside his own camp.

It is such incidents of confusion, on top of their sheer ineptness, that will cost them this year’s elections.