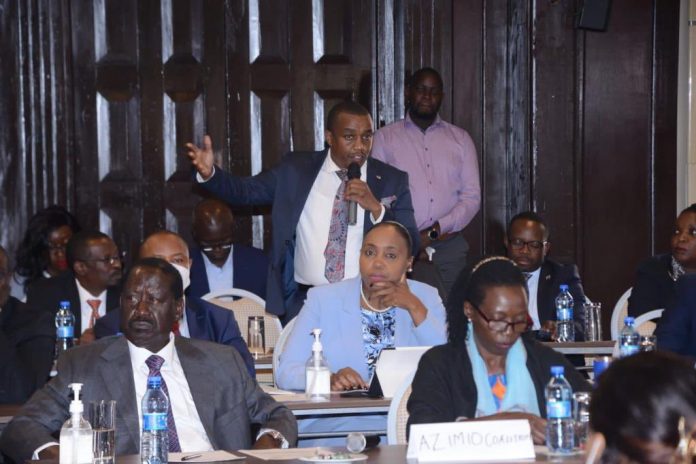 PHOTO CAPTION: East African Data Handlers Group MD and CEO, George Njoroge. He is serving as Azimio La Umoja’s IT Guru in the coalition’s bid for the presidency

East African Data Handlers, Group Managing Director George Kariuki Njoroge, has been sued by a company, Aworky General Supplies Limited, at the Chief Magistrate’s Court in Nairobi for falsely obtaining Sh2m with a promise to pay back only to refuse to pay the money.

According to court documents seen by this blog, Mr Kariuki is reported to have approached a Director at Aworky General Supplies for a soft loan with a promise to pay back the funds.

But after the funds were advanced to him, he disappeared and refused to honour the promise to pay.

The complainant has further accused East African Data Handlers of ordering office furniture and other goods worth the sum of Sh205k but later failing to pay for the delivered goods.

In Azimio, George Njoroge was picked as the ICT chief and handles all matters dealing with technology.

Njoroge has served at East Africa Data Handlers as Managing Director of the company since its establishment 15 years ago.

Since 2016, he has also served as CEO of a newer venture — Alternative Pulse Plc, trading as Go Pesa.

The firm describes itself as a ‘mobile merchant platform powering over 10,000 merchants in Kenya.

Njoroge holds a Bachelor of Science in I.T from the Jomo Kenyatta University of Agriculture and Technology (JKUAT).

His professional career has seen him hold several key IT roles in the private sector.

In 2004, he spent 10 months at Microsoft before moving on to Sahara Computers as IT Manager for Kenya and Uganda.